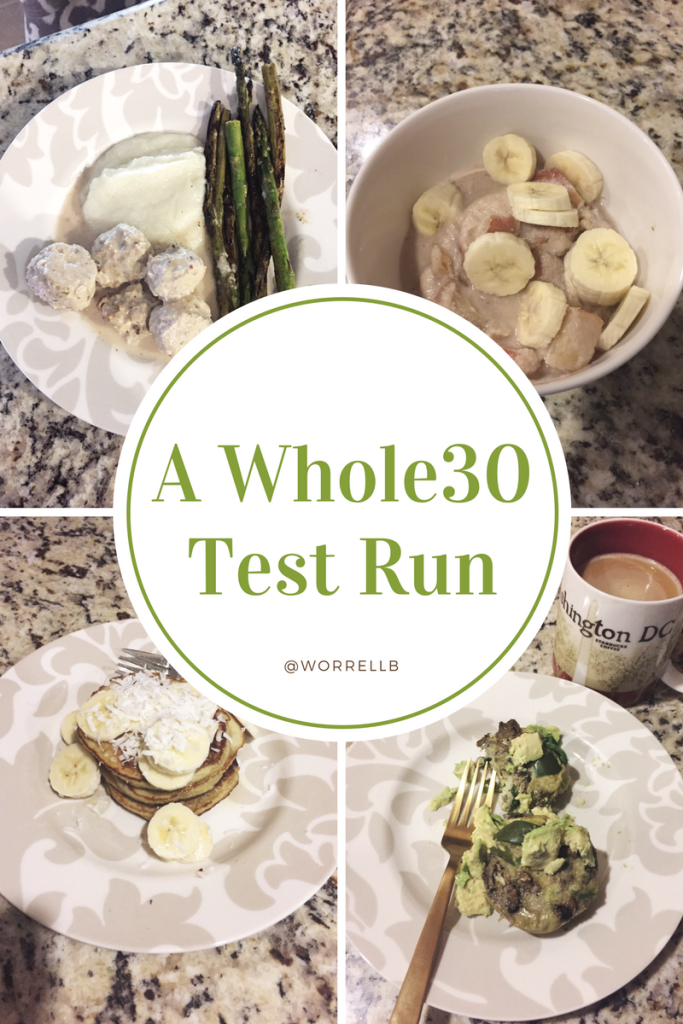 Because of my interest and background in health and fitness, I admit I’ve always been interested in the latest trends when it comes to healthy eating and working out. With that said, I’m quick to skip out on things that seem a) unhealthy and b) are just a fad. Okay, well there was that one time I tried the Dukan Diet for like a week because supposedly that was the diet Kate Middleton was on. But that’s neither here nor there…

So, I’ve heard a TON of things about Whole30 and my mom even shared the book with me a couple of years ago and I completely disregarded everything it said at the time. Truthfully, Whole30 seemed like a fad because ‘everyone was doing it.’ But, then I happened to stumble upon some Whole30 recipes on Pinterest and read a few blog posts from bloggers I follow and started to get interested in trying it.

Side note: I typically have no problem following a meal plan, but I don’t agree with depriving yourself, aka, most ‘diets.’ That’s why I personally love and always share the Tone It Up program with anyone who asks me for health advice, because Katrina and Karena get it – it’s all about balance and never truly depriving yourself, but realizing the benefits of feeding your body healthy food. 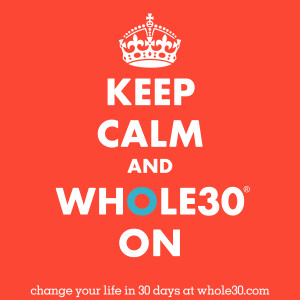 With that backstory in mind, I started to read up on Whole30 and got really interested in it, primarily because I found myself eating too many grains (like not the healthy kind – white flour, corn – like bread and tortilla chips, etc.) and not enough lean protein and vegetables. I had already cut dairy because of breastfeeding and Blakely seeming to have a dairy intolerance, so hopping on board the Whole30 meal plan was not too much of a stretch for me. I naturally lose weight when I’m nursing and tend to take advantage of that by eating whatever I want. That’s not to say I ate junk food all day because that’s not me at all – but I felt like eating fewer homemade vegan nachos for lunch and more veggies and protein would be a good change! I was feeling pretty lethargic, mainly due to lack of sleep, but I also attributed it to not eating enough fruit, veggies and protein each day.

From the beginning, I did not plan to follow Whole30 100%, because there are two other people (one a picky husband and another a picky toddler) eating most meals around here and I’m not going to make separate meals for all of us – I’m all about balance…and making life easier, not harder. 🙂 My goal has been to use Whole30 to better fuel my body and serve as a reminder to keep fresh foods in our house rather than snack foods with zero nutritional value. I’m going to fess up here: I TRIED to drink my coffee black or with organic coconut cream as recommended by so many Whole30-ers, but I just couldn’t do it. Coffee is too great a commodity at this point in my life (with a 2.5 year old + 7 month old) and I’m not going to suffer without my favorite creamer. 🙂 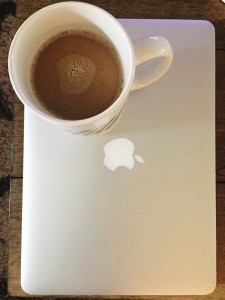 My thoughts so far? I really love the recipes I’ve tried so far and I even feel better on a daily basis. We had gotten into a boring rotation of the same dinners on repeat (mainly because of said picky toddler), but it’s been nice trying new recipes and being amazed at what she will eat.

Back before having two kids, I used to meal prep on Sundays for the week, but I had really gotten out of the habit and then when I started working from home, I didn’t bother preparing food for the week. But, with two little kids, I desperately wanted to get back into meal prep mode, because even though I’m home, I barely find time to throw together something to eat for breakfast or lunch. Pretty much since Blakely was born, I had been eating a protein bar for breakfast every morning. I mean, I love having them on hand in a pinch, but I was really needing something healthier and more balanced for breakfast.

I think my favorite thing about Whole30 is the reminder that I need to do a little meal planning for the week – which I’ve been doing now for 3 weeks and it’s so worth it! I found a really great breakfast casserole recipe that makes enough for the entire week, and it’s been a lifesaver in the morning. I’ll share it on the blog soon because it’s so good!

If you’re curious about Whole30, I encourage you to read more about it and give it a try. Follow me on Pinterest if you’re looking for some recipe inspiration 😉