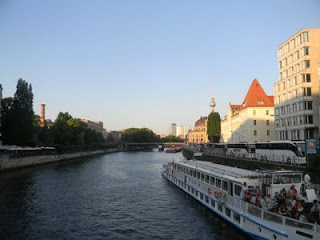 After spending one too many days in Amsterdam (that was just two days, if you’re wondering…ha), I was more than happy to be boarding the train to Berlin, Germany. We took an early morning train, but with multiple stops, it still took 7+ hours to arrive in Berlin, putting us there late in the afternoon. My first impression was that Berlin was a HUGE city, especially compared to the cities we’d visited so far on this trip. Finding the right bus to our hostel was quite an adventure, as we discovered our first real language barrier: the first bus driver we spoke to did not speak any English. Surprisingly, until this point, we had not had trouble finding someone who could understand and speak English. We finally found the correct bus and made our way to the hostel. As luck would have it (again), after making a few turns, we stumbled upon our hostel. We certainly have dumb luck going for us…
Our hostel was a major improvement from the last one in Amsterdam. For one, we had a four-bed room instead of a ten-bed room. That makes a huge difference. Also, this place was much more modern/new, with nice bunk beds that didn’t look as though they’d break if you lay on them. The one downside: no air conditioning. I know, poor us. The first 10 days of our trip (in Ireland), we spent freezing to death. Now that we’ve encountered a bit of a heat wave, I appreciate those chilly days in Ireland a little bit more! For the most part, the warm, sunny weather was pleasant…might actually get a tan, finally. Ha.

On our first full day in Berlin, we walked all. day. long. around the city. First stop: The Reichstag, where we took a few pictures and had a pretzel we bought from a vendor on the street for one Euro…one of the cheapest deals we’d seen this entire trip. Next up: The Brandenburg Gate. Very impressive to see in real life. It reminded me of the Arc de Triomphe and the Champs d’Elysees in Paris because of the way it was set at one end of a busy street. After a stop at Starbucks (literally one on every corner in Berlin…felt like NYC!), we made our way to see the remains of the Berlin Wall and Checkpoint Charlie. Obviously, these remnants are a reminder of the difficult years that Germany has been through, but seeing them in real life truly puts it into perspective.

Our second day in Berlin, we had planned to visit the Charlottenburg Palace and the Olympic Stadium. After a stop at the palace, I was exhausted from a combination of the heat and being sick (I caught a cold as soon as we got to Berlin…), so we decided to take a bus to the Stadium. We got ON the right bus, but we got off at the wrong stop. Conveniently near a Starbucks. So we stopped in and used the free wifi while we were there (it’s the only place that has free wifi!) to look up information on the stadium. As I was researching it, I found out that it was closed that day for an evening concert. Since we had made our way to the opposite end of the city, we had trouble finding a direct bus route back to our hostel. After several mix-ups, a subway, and a train later, we were back at our hostel. So, our last day in Berlin was spent becoming familiar with the transportation system…ha.

We woke up this morning early in order to catch a high-speed train to Munich, where we’ll only be staying for one night. When we arrive at 3:00pm, we plan to hit the Hofbrauhaus for beer and dinner. A full German meal, perhaps? It’s worth a try! Tomorrow morning, we’ll hop a bus or a train to Nauschstein Castle (the Sleeping Beauty castle) for a visit, then make our way back to the train station for an overnight train to Rome. Obviously, the next few days are going to be a whirlwind, but its going to be fun. I’ve been looking forward to a stop in Munich, since I love Bavarian Germany! Next post will be from Roma, Italia!

It’s been a while since I’ve talked ‘food’

Quarantine activities 😘 When will this ever end

2021 has undoubtedly been the most challenging yea

Had so much fun in NYC ❤️ Blakely wants to liv