All throughout this pregnancy, I hoped to have the birth experience that I didn’t get with Blair. Don’t get me wrong – it’s not that my labor and delivery with Blair was bad, but it just didn’t go as I had planned (yes, I had a detailed birth plan the first time around!). And we all know how ‘planning’ goes when it comes to labor 🙂 That’s why, this time I didn’t write a birth plan. I knew what I wanted to happen, but since I learned the first time around that it really isn’t something you can control, I just skipped the planning stage this time. Which, admittedly, wasn’t an easy feat for someone who is chronically Type A.

My goal this time was to not be induced – and to hopefully go into labor before my due date so we could potentially avoid baby swallowing any meconium and having to stay in the nursery (which is what happened to Blair). At my 37-week visit, my doctor asked if I wanted to set up a possible induction date, since the hospital I was delivering at required you to schedule at least two weeks out. While I really didn’t want to be induced, I also didn’t want to go much at all past my due date (since my due date with Blair had been off by over a week, and I didn’t want that to happen again). We set up my induction for August 9th, the day after my due date. A few days later, the doctor’s office called and said they had to bump my induction date to August 12th(!) due to scheduling and the hospital being ‘booked’. Because of the meconium and miscalculated due date issues with my first pregnancy, my doctor and I reworked my possible induction to August 5th (since they don’t do weekends and couldn’t do the 8th or 9th). I had a sinking feeling that going into labor spontaneously wasn’t in the cards this time around, either, since I’d only be 39 weeks, 4 days on the 5th. 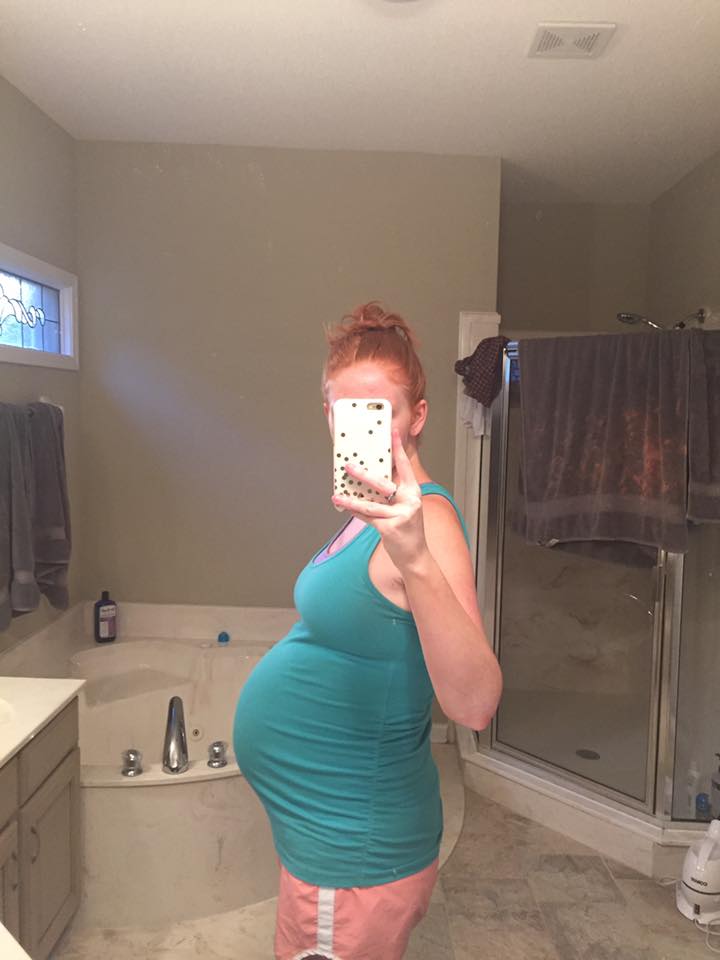 As I was really hoping to avoid induction, starting at 37 weeks, I was trying all of the ‘natural induction’ techniques that didn’t work with my first pregnancy and asking the doctor to strip my membranes. Spoiler alert: not a single one of these caused any labor signs – over a three-week time frame, I did dilate from 2cm to 3cm…but that’s it. No contractions at all. I continued to test out all of the old wives’ tales for bringing on labor right up until 11:59pm on August 4th, and then I came to the realization that if I didn’t go into labor naturally within the next 7 hours, an induction would be happening. Another spoiler alert: I didn’t go into spontaneous labor in the next 7 hours. 😉

So, yet again, I woke up on Induction Day and knew it’d be the day we’d meet our (2nd) baby. I won’t lie, I was pretty bummed that I still haven’t experienced going into labor without Pitocin and having my water broken – but the planner in me was secretly relieved that I wouldn’t have to rush to the hospital and worry that we wouldn’t make it on time (my ultimate fear, especially the 2nd time around!).

We arrived at the hospital right on time, and from the very beginning, I felt so much more comfortable this time around. Living in a new state, I wasn’t sure what to expect from a new hospital, but everyone was amazingly nice. My nurse was close in age to me and was so sweet and took away any nervousness I had (which was a lot less this time around, minus a few worries). My doctor had me set up right away on Pitocin and came by soon after to break my water. After a little while, I started to feel continuous horrible lower back pain, and contractions off and on. Around 11am, the lower back cramping was killing me and I realized I was having what I’m pretty sure was back labor. I asked the nurse if it was too early to ask for an epidural (because I felt like a huge wimp compared to the first time around…since I waited longer!) – and she said absolutely not…and that the anesthesiologists had a full schedule starting at noon, so it was the perfect time to request it. Otherwise, I’d be waiting a while. No thank you. 🙂 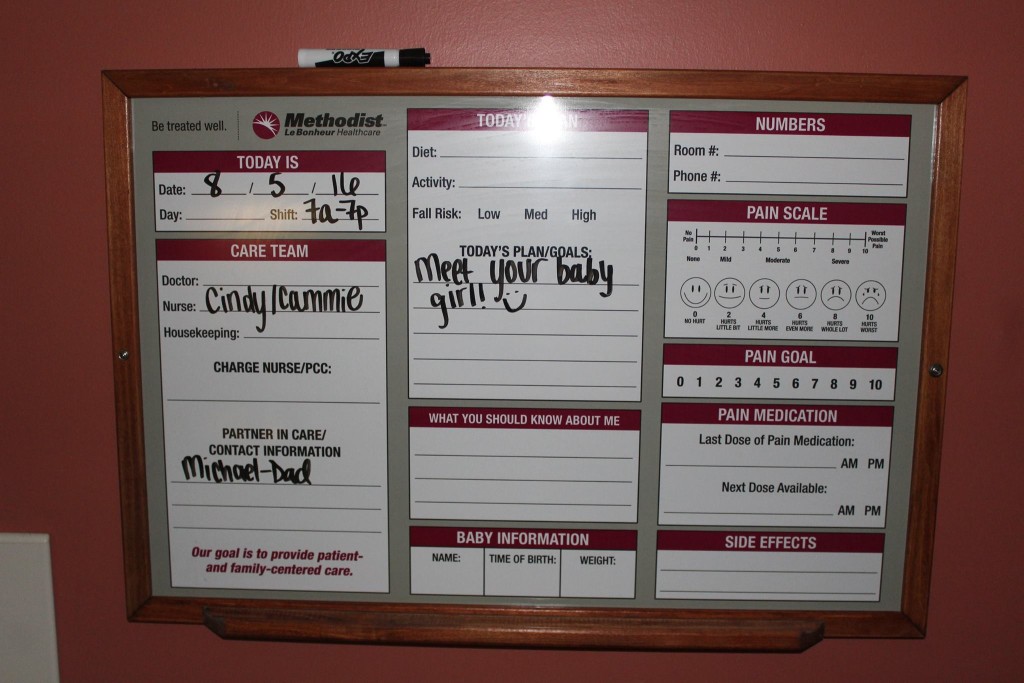 The next 30-40 minutes were pretty miserable, while I waited for the anesthesiologist to arrive. While my contractions were coming and going, the back cramping was constant and I had absolutely no relief. Finally, my new best friend arrived and started the epidural process. I’m happy to report that my husband stayed in the room this time (last time I kicked him out because he almost fainted) and he held it together. 😉 The relief was pretty instant on my left side and I felt soooo much better – but I was still feeling pain on my right side. I started to get super anxious, because one of the main worries I had this time around was the epidural not working. I let my nurse know I still felt contractions on my right side, and she said to give it 15 minutes and if it wasn’t going away to let her know. After 15 minutes of pretty uncomfortable contractions on my right side, I was pretty confident it wasn’t working. They had me lay on my side and turned up the dosage, and after another 15 minutes, it finally worked! I can honestly say that I was 1000x more numb this time than I remember being when I had Blair. Which was scary, since I wasn’t sure I’d know when to push!

For the next hour or so, I was super relaxed and almost fell asleep a few times. At 1:50pm, my nurse asked how I was doing, and I told her I was starting to feel some pressure and maybe she should check me. She said she’d wait until 2:30, so for the next 30ish minutes, I continued to feel a lot of pressure – but absolutely no pain. When she came back, she did check me – and found out baby was literally right there, ready to go. She paged the doctor, who wanted me to do a practice push first. When I did that, my nurse had me stop mid-push because this baby was about to pop out! Yikes. She called the doctor back, who literally ran over to the hospital and it was go time. I was having to resist the urge to push as they got set up, which is easier said than done. After a few minutes, everyone was ready and I waited for another contraction to start pushing. I literally pushed two times during one contraction, and Blakely Camille Boyce was born. 🙂 It was the easiest childbirth experience I could have had. Have you seen the childbirth scene in What to Expect When You’re Expecting, when Brooklyn Decker sneezes and the baby just pops out? That was literally like my experience. If this is what childbirth is like, I could have 5 more babies (okay, maybe not…but you get my point!). 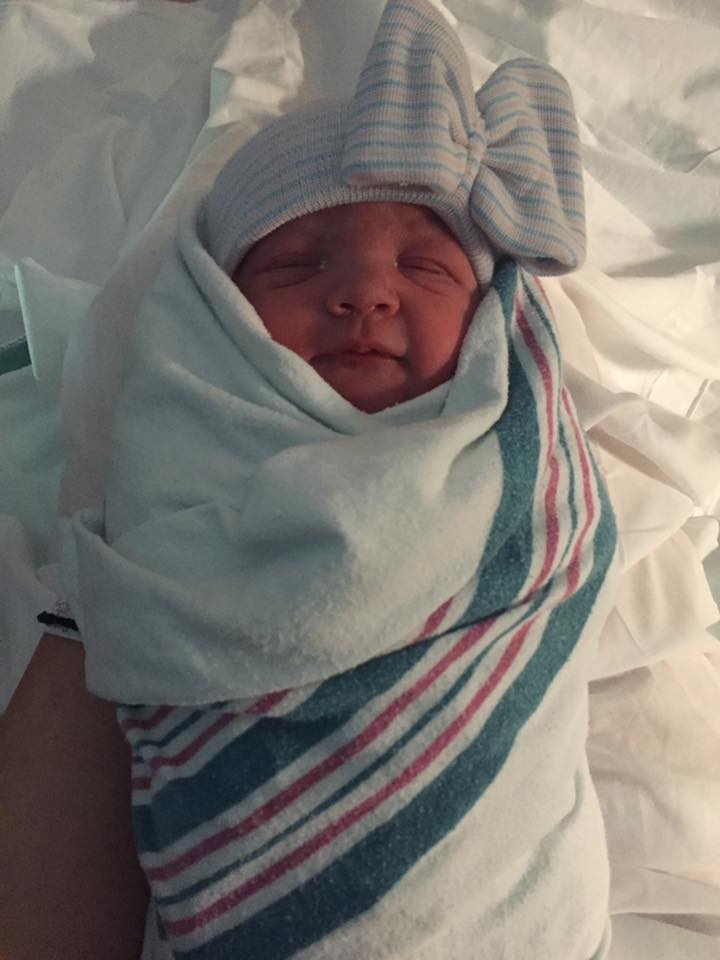 I was able to hold her right away, as soon as she was delivered, which was an amazing experience in itself that I didn’t get with my first pregnancy. For the past two years, I felt cheated out of the delivery experience that I wanted so badly (even though I’m ultimately glad Blair ended up being healthy!). I was able to have the experience I wanted, and was also able to have skin-to-skin and start breastfeeding right away. I truly think that has made our breastfeeding experience so much smoother from the start this time (but that’s another post for another day!). 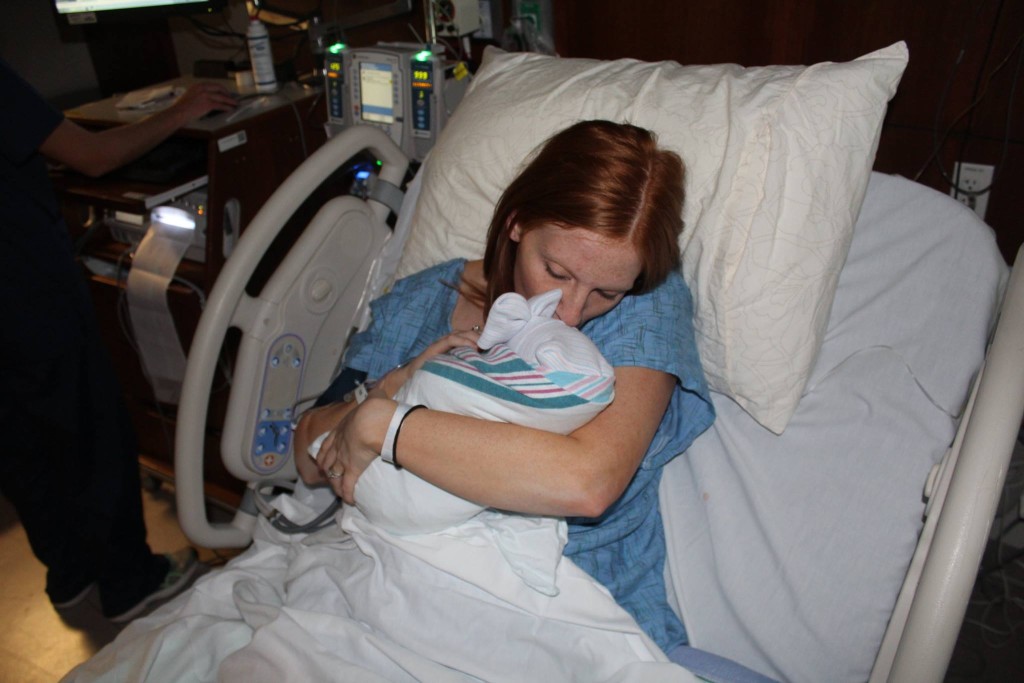 Blakely was 7 pounds, 9 ounces and 20.75 inches long and had quite a bit of hair that looks a little red to me! She doesn’t look quite as much like Blair at birth as we thought she would (based on our last ultrasound), and not identical to Daddy. There’s hope that one of our children MIGHT look somewhat like me 😉 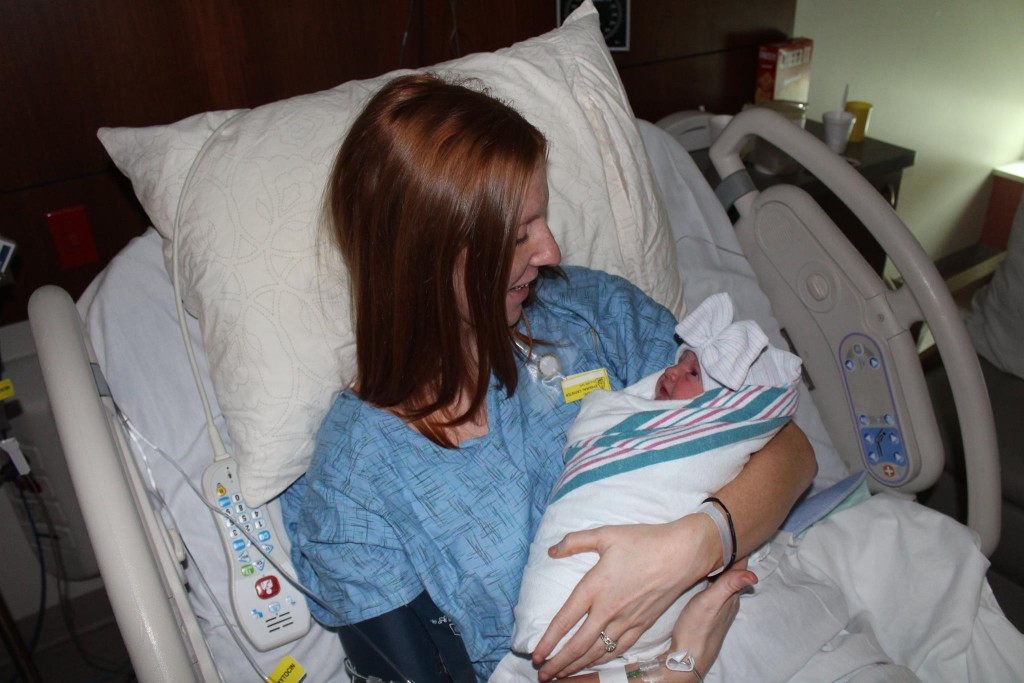 Big sister Blair got to meet her baby sister that night, and it was super sweet! She kept pointing and saying ‘Baby’ – and then she got bored and turned into a devious toddler 😉

My birth experience went so smoothly and I felt fine, so we were able to go home after just one night in the hospital. It was so nice not to be terrified this time around – I was actually looking forward to going home, rather than dreading it! It really is amazing how different and more prepared you feel once you’ve experienced life with a newborn once. That’s not to say it’s easy, but so far, it’s been so much less scary this time around. Now, juggling a newborn and a sassy toddler on my own during the day is another story! 🙂 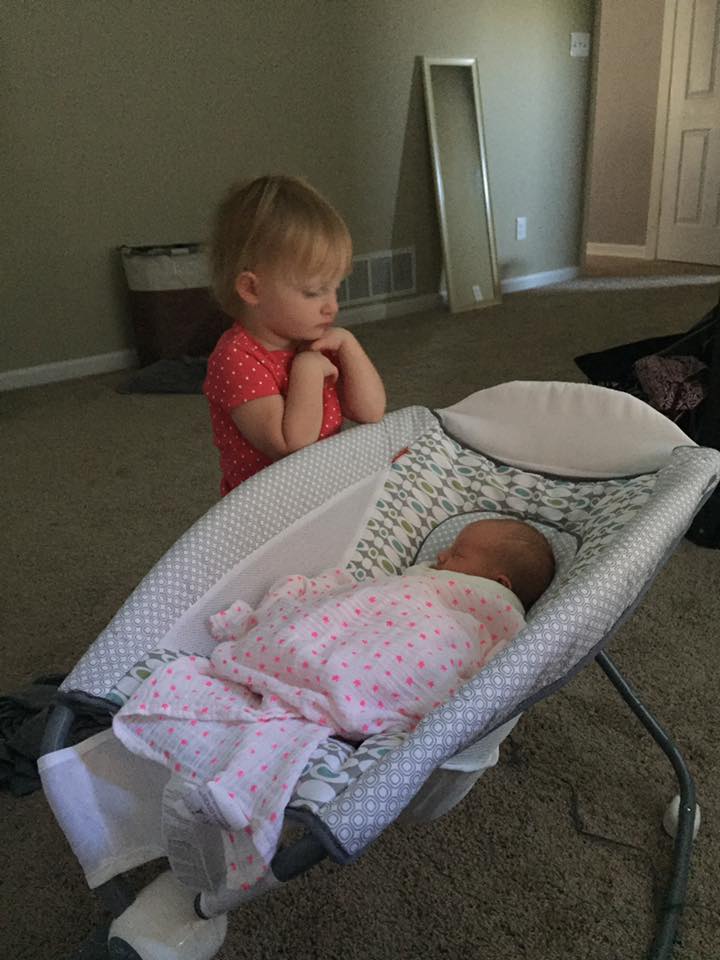 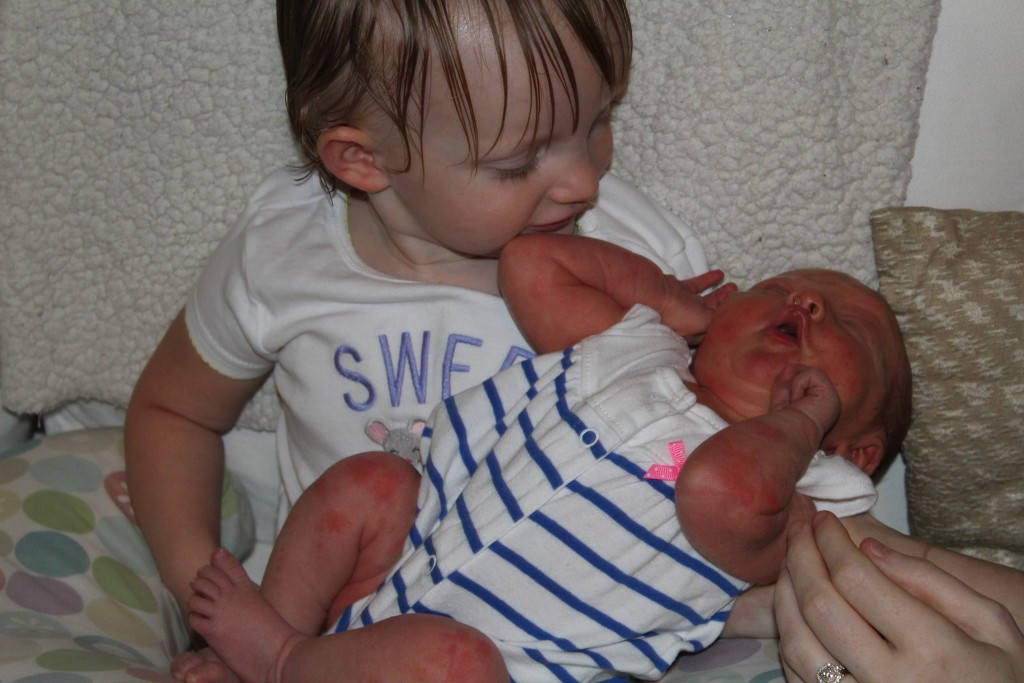