If you’ve been following along on Instagram, I’ve shared a few details about our biggest project at the moment: shopping for a new SUV that will be big enough for 3 kids! We currently have a Ford Edge, a smaller 5-seat SUV that we bought 5 years ago before our oldest daughter was born. It has been a fantastic vehicle and if it had enough space, I’d keep driving it. With that said, we are looking for a midsize to full-size SUV that seats 7, and I thought I’d share how we’ve tackled the process thus far, in case you’re in the market for the best family car or will be in the future! 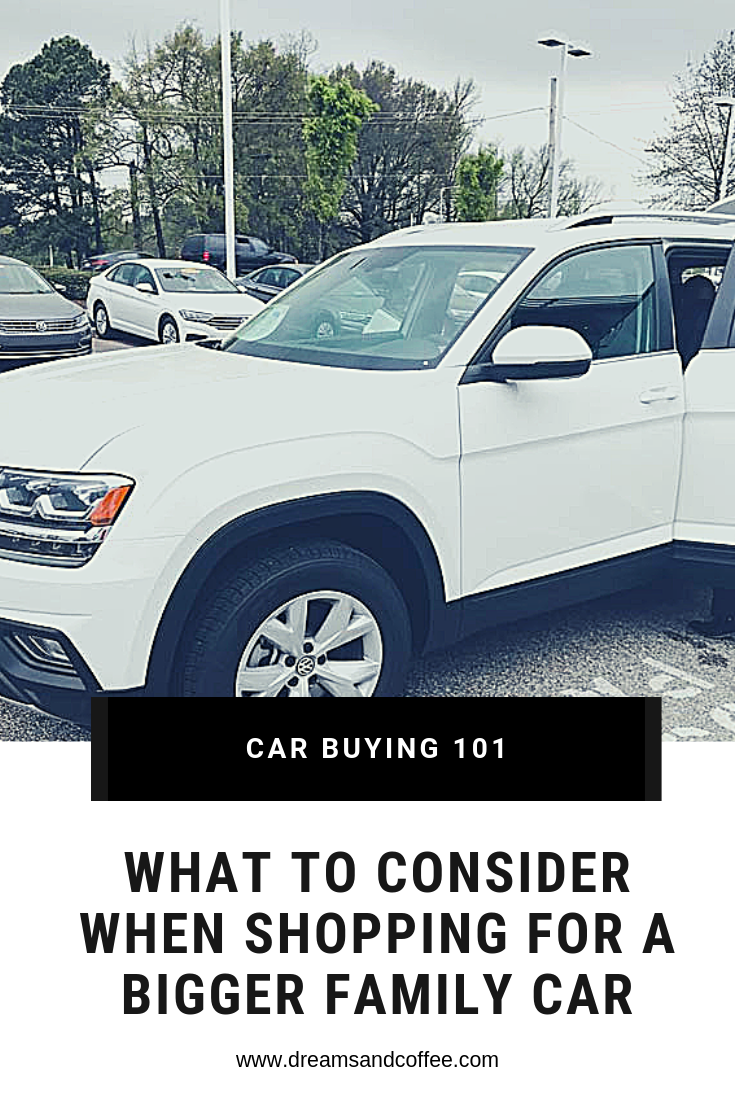 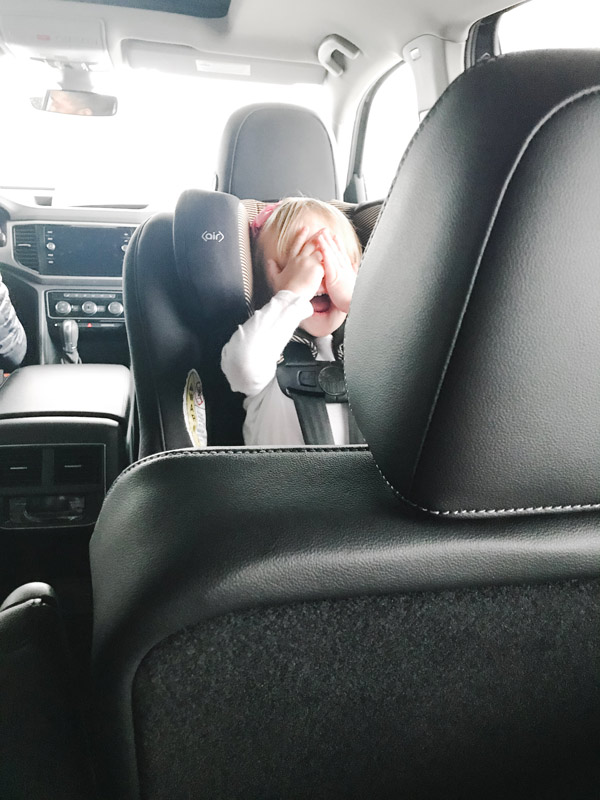 We actually started talking about bigger SUVs last year, well before we found out we were expecting baby #3. Since we knew we were planning to have a third child, we were well aware we’d also be car shopping when we did find out we were pregnant! Side note: I am NOT a minivan person – not my thing, never will be – so, unfortunately, you won’t find them on my list! I spent spare time here and there researching different options and if I saw someone’s Instastory in their car and it looked spacious, I had zero shame and would DM them to see what they drove. These two things helped me build a list on my phone of potential SUVs that could be the best family car, which looked a little like this:

Once I made a list, I checked out all of these online to see pictures of the interior, but admittedly, it was hard to tell how much space the SUVs really had from just a photo! I also had some recommendations from a few of you guys via Instagram, including: Chevy Traverse, Lexus LX, Honda Pilot, Toyota Highlander, and Chevy Tahoe. The next step for us was to check some of these out in person to find the best family car. 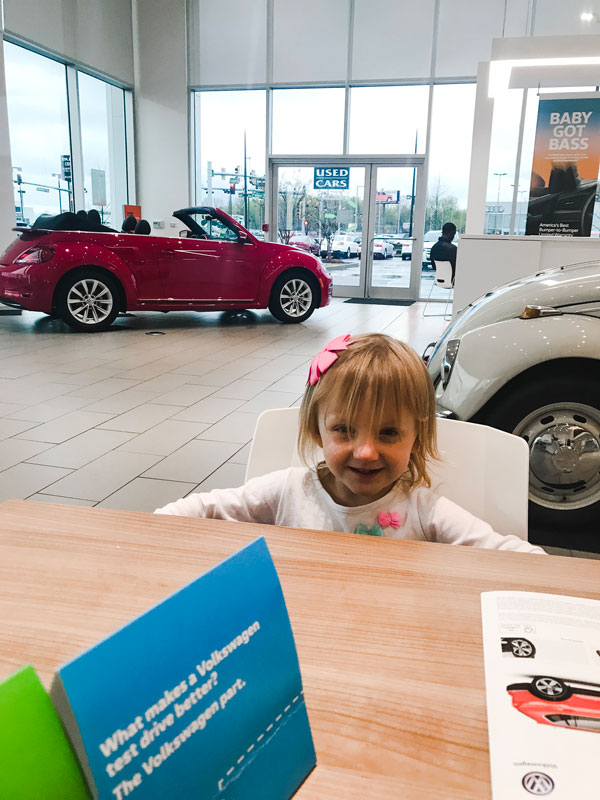 So the way we did this was actually not my intention, but it worked out well! My mom was in town keeping the girls, and my husband and I were out running errands so we decided it would be a good time to browse our initial list of SUVs – without kids in tow! Unfortunately, we didn’t plan far enough ahead and this was the Sunday before my mom left to go home and most dealerships were closed on Sunday. I had never been before, but looked at CarMax’s website and saw that they were open. I quickly realized this would be the perfect one-stop place to see most of the cars on our list, since they carry all makes and models. I did not know before going there that all of the cars are used, but since we were just looking, it really didn’t matter. I will say that I was not impressed with how well they cleaned and deodorized the cars, so that alone would probably deter me from recommending CarMax to anyone – but the trip served its purpose. We were able to see just about all of the cars on our list and very quickly crossed two-thirds of them off my best family car list – yikes!

Now, everyone’s preferences are somewhat different, but I’m pretty sure most of the things we are looking for in a new SUV will be relatable to most parents. Here are the biggest factors we are looking at when it comes to buying the best family car:

Also, my husband can drive any vehicle so he wasn’t concerned about size, but I admit that I was a bit wary of the bigger SUVs like a Suburban from the very beginning! Admittedly, something we cared about when car shopping before kids – miles per gallon – really didn’t play a huge factor this time around when it came to the right vehicle. I think that’s more important if you’re commuting daily, but I drive short distances each day and we take around 2 big road trips per year, so the most important factors for us are interior space and comfort. After peeking inside all of the options and seeing if they met our criteria, we had narrowed down our list to just the Ford Expedition, Volkswagen Atlas (with reservations) and the Infiniti QX80.

*Note: In the Atlas, we decided we prefer a bench seat, as it gives us an extra seat to carry more passengers. The way the middle seats slide forward with a car seat attached makes it so easy for people to access the 3rd row!

This is the fun part, right?! Maybe not quite as much when you have to install two car seats in each new car to test drive! As I mentioned above, we initially had some reservations about the Volkswagen Atlas, but since we saw a very base model at CarMax, we decided we should go to an actual Volkswagen dealership and see if the nicer versions were better. To be honest, we were headed out to visit a Ford dealership to test drive the Expedition when we decided on a whim to visit Volkswagen first! I figured if we drove the Expedition first, we’d immediately nix the Atlas since I had almost made up my mind that we were going to buy an Expedition at that point.

Well, in a surprising turn of events, we checked out a few of the Atlas’ on the lot and test drove the SEL, which is the nicest “tier” of this model. I sat in the third row at first and was surprised at how comfortable it was, then switched to the front seat later. It had all of the bells and whistles and technology and just felt like a luxury vehicle – so different from that first one we saw at CarMax! We left the dealership surprised and also a little confused because we had previously agreed that it probably wasn’t going to be a good fit.

Next, we headed to the Ford dealership and test drove the Expedition. I noticed a few things right away – installing the car seats took longer, there wasn’t really any more foot space in the middle and back rows of the Expedition than in the Atlas, it handled like a truck while driving and it did not have the luxury interior feel that the Atlas did. I didn’t drive – but even as the front seat passenger, I could tell it would take a lot of getting used to driving something so huge. As we left the Ford dealership, I admitted that I much preferred the Volkswagen Atlas, a surprise to both of us! Every time I see a new Expedition, I love how sleek it looks, but honestly, the interior doesn’t hold a candle to how pretty the exterior is. All in all, the Volkswagen Atlas has a nicer, more luxurious feel, plus it’s about $20,000-$25,000 less expensive(!) and has a better warranty.

Where We Are Now

So, if you’re wondering if we’ve made a decision on the best family car – the answer is not quite! We recently found out about the Subaru Ascent, which is essentially the same size as the Volkswagen Atlas, so we actually went and checked that one out last week. Unfortunately, the interior was quite a bit smaller than the Atlas and wouldn’t work for our needs but it was a nice SUV! I also think we have basically knocked the Expedition off our list (so crazy, since I was pretty set on it for a while!), and as current owners of a Volkswagen Jetta, we trust the Volkswagen brand so we’re leaning toward the Atlas. But, starting our search so early has given us ample time to think through our decision carefully and possibly even do a few more test drives before settling on a new car. In the past, we’ve quickly made a decision when it came to buying a new car, so I’m proud of us this time around for taking our time and shamelessly revisiting the same dealership multiple times to make sure we’re making the right choice!

Do you use a process when shopping for a new car? What are your must-haves for finding the best family car?