My birthday was a few weeks ago and typically, my husband and I try to sneak out and have a nice dinner at a fancier restaurant. This time, though, I had an idea to try something different – to take a cooking class together rather than go out to a restaurant! We both love to cook, so I’ve thought about how fun it would be to take a cooking class for a date night and since my mom was in town to keep the girls, it was perfect timing. 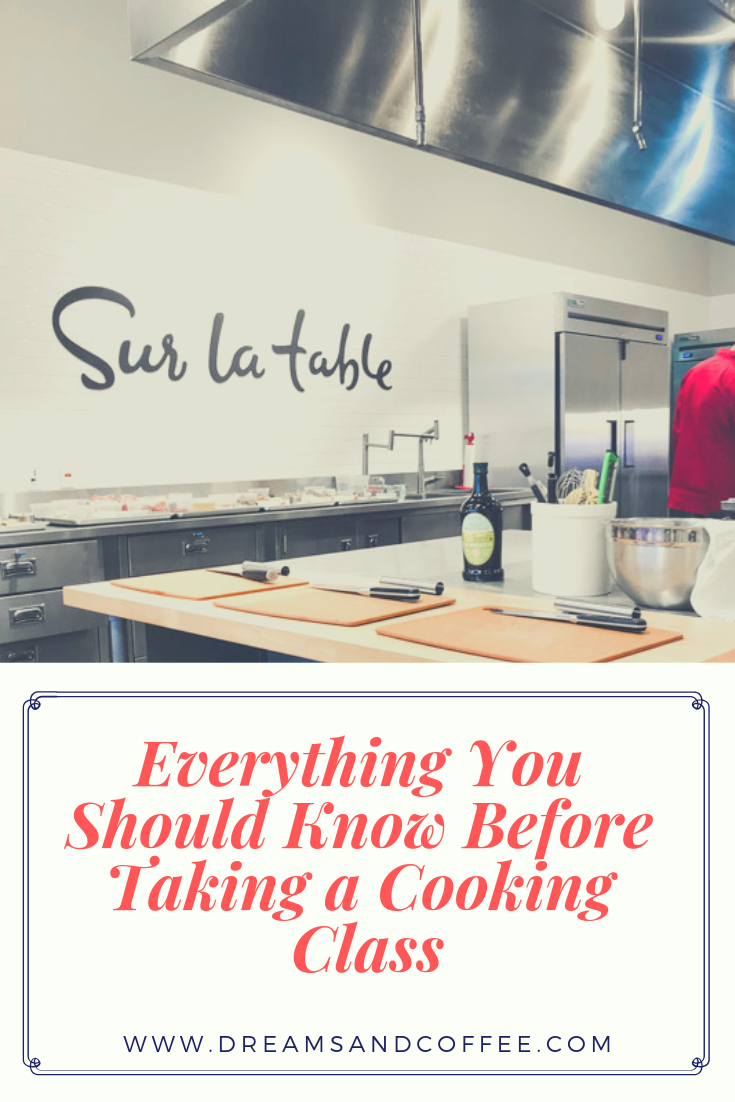 Finding Where to Take a Cooking Class

The first thing I did was research where we could take a cooking class in our area. We are fortunate to have several places to choose from, including Whole Foods Market and Sur la Table. There used to also be a culinary school nearby, but I saw that it recently closed…so that option was out. If you do have a culinary school in your area, definitely check it out to see if they offer cooking classes. If not, I know most cities have a Whole Foods at the minimum, so that’s a good option. I believe that Williams-Sonoma does smaller cooking classes, too.

Next, I checked the event calendars at both places to see when they offer cooking classes. Between the two, we had plenty of options in terms of schedule, since weeknights and weekends were available. As it turns out, the times Sur la Table offered were better for us, so that’s where we decided to go! So, we chose a few times that would work for us and then reviewed the menu for each night. Honestly, it all sounded pretty good to me, but I wanted something that would be a little bit more in-depth so we opted out of the French-themed option of steak, potatoes and green beans and decided to go for the New Orleans’ French Quarter theme. When it comes to pricing, Whole Foods and Sur la Table were pretty competitive – within $10 of each other. We ended up paying $118 for both of us, which is at least what it would cost for us to go out to a nice restaurant, so I was totally fine with that. 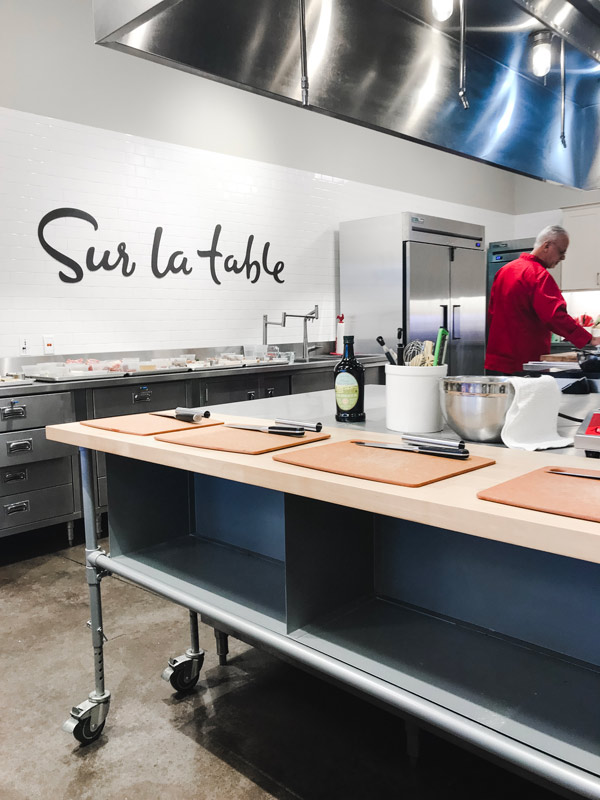 Take a Cooking Class: What to Expect at Sur la Table

When we signed up, the thought of taking a cooking class just sounded fun – but the day of the class, I actually started to get a little nervous because I wasn’t sure how serious the instructor was going to be! When we arrived, we were a little early, so we walked around the Sur la Table store a bit beforehand. We finally headed for the cooking class area, which turned out to be a pretty substantial, fancy industrial kitchen – it reminded me of what you’d see on a cooking show (watching these are a guilty pleasure of mine). I started to get even more nervous because I realized this was legit! We were given aprons and nametags to wear and Chef Al gave a brief overview of the night’s menu and what we’d be doing. If you do go to Sur la Table, they provide great hospitality – they had a fancy espresso machine to make coffee for everyone and a platter of fruit and cheeses to snack on during the class, too.

We had a full class – 16 people – so we were split into groups of 4. To be honest, I was a little apprehensive to be working with strangers, because I’m a control freak in the kitchen and I’m not even afraid to admit it. ha ha. The couple we worked with turned out to be super nice (except when the guy tried to show me – a beach girl – how to peel a shrimp) and it wasn’t a big deal at all working with other people. 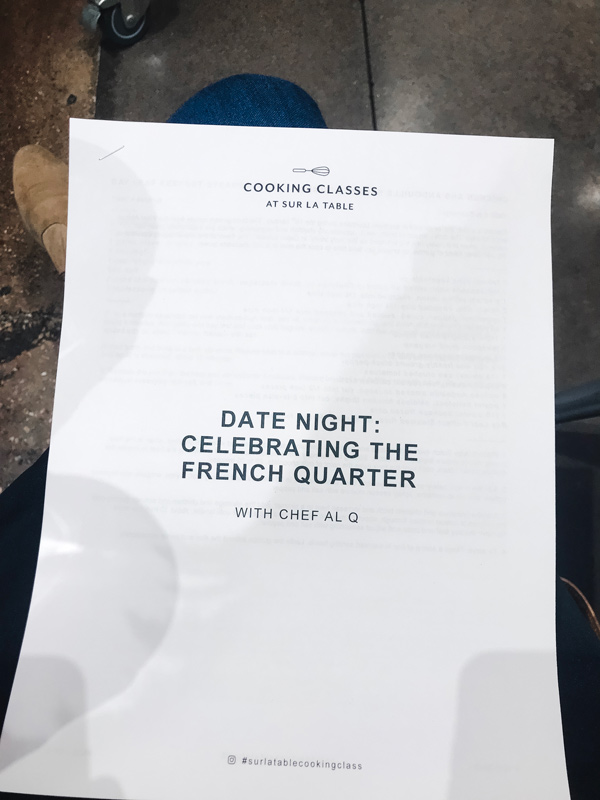 We did one course at a time and were given a tray with all ingredients for each course. Each team of 4 had to divide and conquer the process of each course, from peeling and chopping to mixing and cooking based on the chef’s instructions. We tried to split everything evenly so we each had a turn actually cooking a dish and it worked out well. First, we made Chicken and Sausage Gumbo, then Shrimp and Grits and finally, Bananas Foster for dessert. I actually did the cooking process for the Bananas Foster and got to light the pan with rum on fire – super fun! We prepped and cooked the entire meal and then at the end of class, they combined each team’s dishes into a big serving dish and we all got to sample a generous portion of everything we made. 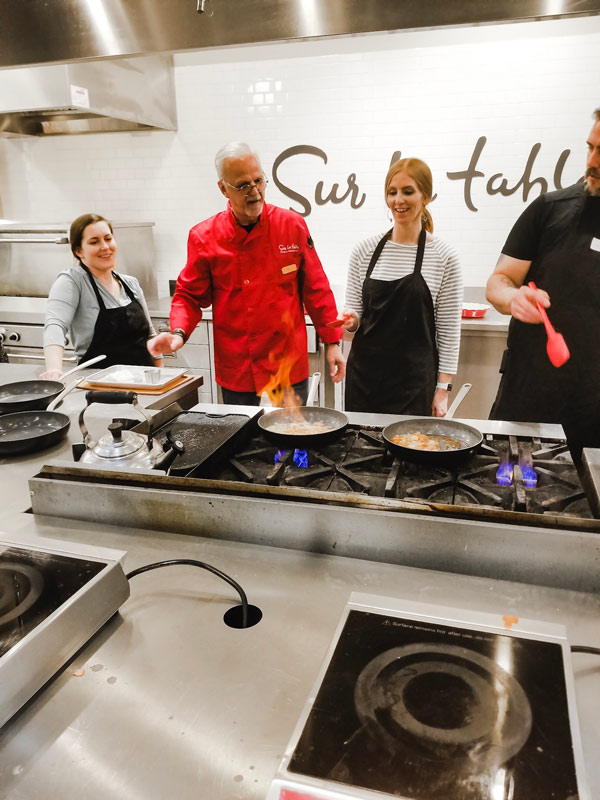 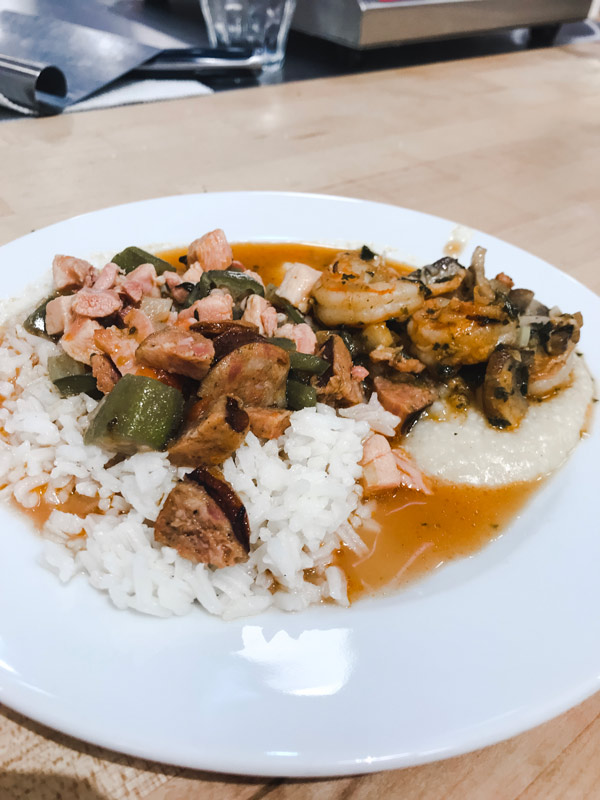 Take a Cooking Class: How to Deal with Food Allergies or Sensitivities

I thought I’d quickly cover this topic, since I avoid dairy and gluten (because of a sensitivity, not an allergy). Ideally, the best class for me probably would have been the French theme with steak, potatoes and green beans because there wasn’t really much dairy or gluten to be concerned about. But, I wanted something a little more ‘fun’ and since I don’t have an allergy, I was okay with being a little more lenient on the menu items (and note, butter doesn’t really bother me, so I’m okay with that in moderation). I did nix the Irish theme menu because of all the cheese, but the New Orleans menu wasn’t too bad. The gumbo was totally fine since it didn’t have milk or gluten, but the Shrimp and Grits did have a tiny bit of cheese in the grits. I only took one tiny bite of the grits and was fine! When it was time for the Bananas Foster, I just had some caramelized bananas and opted out of the ice cream. If you don’t have a true allergy and aren’t overly concerned about cross-contamination or sampling a small amount of foods that you generally avoid, I’d say you have very little to be concerned about – just choose a class that will mostly work for your diet. 🙂 If you do have serious allergies, I’d recommend calling ahead and finding out their process and what ingredients they plan to use because I did see that Sur la Table had a note about potential of traces of allergens in their classes.

Have you ever taken a cooking class?