I learn a lot by reading other blogs…and if you happen to read fitness blogs, then it’s likely you’ve heard of Lululemon workout apparel too! I have heard so many great things about the brand, so Wunder Under crops and a yoga tank have both been on past Christmas and birthday lists for a while now. Similar to the Tory Burch Revas that I had on my lists, no one in my family really wanted spend that kind of money on one item…so I finally broke down and treated MYSELF to some Lululemon retail therapy! It was totally a post-birthday present to myself. 😉

While I was in Baltimore, my husband came up to visit and we headed down to Georgetown in DC for the day. I was on a mission: to buy my first pair of Wunder Under crops from Lulu. As we were driving into town, Lululemon was one of the first stores I spotted, so we ended up there pretty quickly. 🙂 I made a beeline for the back of the store, where all of the yoga/athletic pants were on display. I found a pair of Wunder Under’s that I liked pretty quickly – they were reversible (classic black/neon green), so it was like having two pairs for the price of one. And let me tell you – you definitely want to get your money’s worth at Lulu! One pair of Wunder Under crops is a pretty $82. 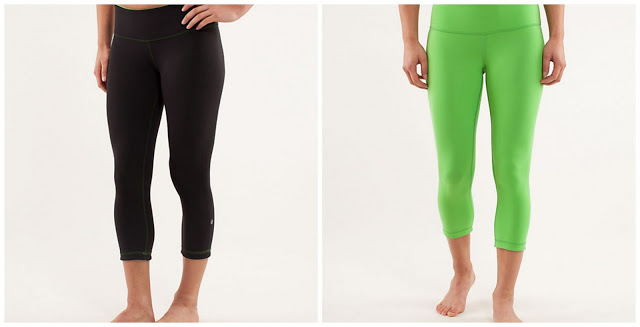 I will say that I really like the pair of Wunder Under’s I bought – they are super comfortable. I’ve tested them out running and in a hot yoga class, and they work well with both types of exercise – although they are technically made for yoga! The Lululemon see-through fabric incident happened literally days after I purchased my first pair of crops, but fortunately the ones I purchased were not affected. I’ve read articles and commentary suggesting that Lulu apparel isn’t as high-quality as it once was, but since this is my first Lulu purchase – I have nothing to compare these Wunder Under’s to! From my perspective, they are good quality and I think I’ll get plenty of yoga sessions out of them!

Only a day before my Lulu purchase, I went to Old Navy to browse the Active line. I’d heard (again, through blogs!) that they really stepped up their workout apparel line, so I wanted to check it out. Old Navy has always been one of those places where I went in with high hopes and usually left empty-handed. They have some cute clothes, but often they were ill-fitting. However, I was really surprised when I went into the store on this particular day. They had an entire section of the store dedicated to workout apparel, and they had quite a selection…and the best part was, they were having a sale. I tried on a variety of leggings, crops, yoga pants, and tanks and found that I liked a majority of the apparel. I ended up choosing two racerback yoga tanks and a pair of cropped leggings. 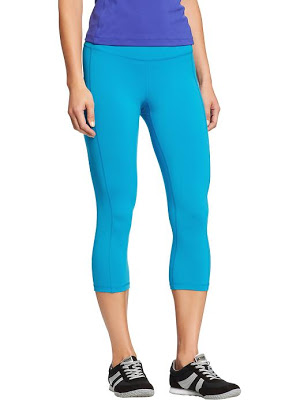 The crops are compression leggings, and they are great for running or other intense cardio workouts. I have run in them several times, taught a Spin class (hopefully more on that later!), and I even went to a hot vinyasa class directly after Spin wearing these crops. For only $23, these really are a great value!
So which is better: Lululemon or Old Navy Active?
Truthfully, I have just as many good things to say about the Old Navy crops as I do about the Lulu crops! I do think that the Lulu crops are thicker (and they are made using Luon, the brand’s patented fabric). However, the Old Navy crops were more breathable (and no, they are not see-through!). I also think that for the price, the Old Navy crops are a great choice. You could literally buy 3.5 pairs of Old Navy crops for the price of one pair of Lululemon Wunder Unders! Do I regret buying my Lulu crops? Absolutely not. They are really great, and I always wanted to have some Lulu apparel to work out in! The true test between the Lulu and Old Navy crops is seeing how long they both last after many washings. I guess only time will tell!
Are you a Lululemon fan? Have you checked out Old Navy’s line of athletic apparel?