Anyone else a fan of club stores? I actually have a love/hate relationship with them, because we spend so much money every time we go! I started to get more strategic about our grocery shopping and we now only visit Costco once per month. If we run out of something that we usually get there before the month is up, I just get it from Walmart when we order our weekly groceries. In most cases, the price per unit is pretty comparable – the biggest benefit of a club store, in my opinion, is the fact you don’t have to buy something as often. With that said, I wanted to share our favorite Costco purchases – most of which are healthy, organic and some, even Whole30/Paleo approved. 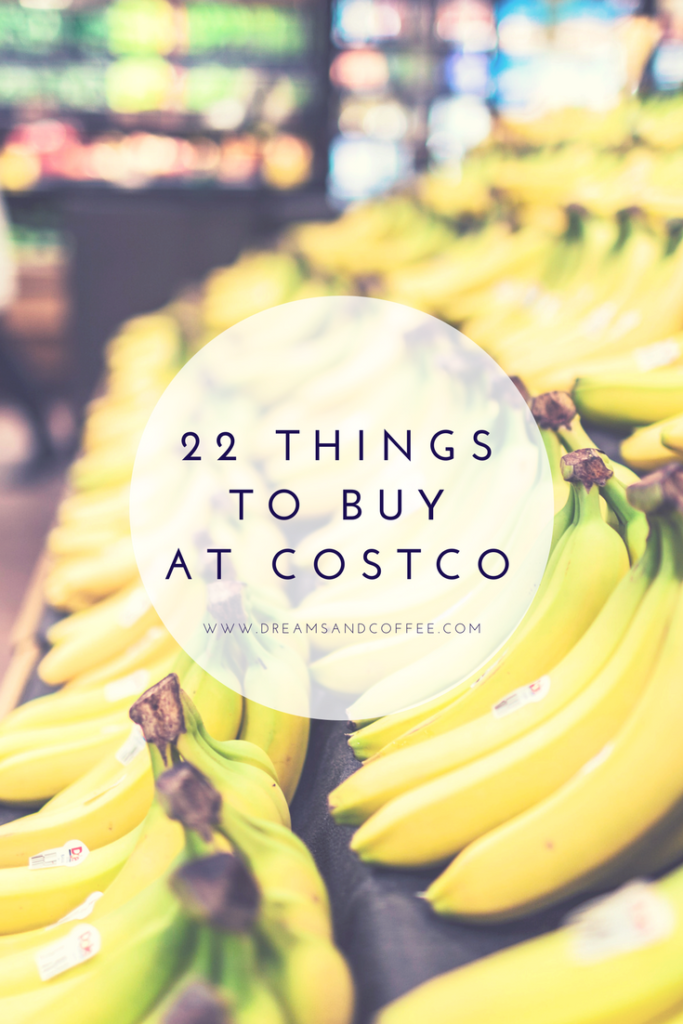 Kirkland Cage-Free Eggs – This is by far the best deal I’ve found on eggs – and we go through a LOT of eggs each week! Less than $4 for 24 eggs – a steal.

Hannah’s Organic Hummus – Not Paleo/Whole30, but we like to keep this in the house for the occasional healthy snack and the girls like it, too! It’s really good with veggies and plantain chips

Purdue Ground Turkey – The price per pound is slightly less than grocery stores, but more importantly, there are FOUR packages included, which leaves plenty for easy dinner prep if we don’t have anything planned.

Purdue Frozen Chicken – I’ll be honest, we buy fresh chicken from the grocery store from time to time, but this antibiotic-free Purdue chicken is the consistently the best and highest quality. Plus, it’s frozen, so I don’t have to worry about rushing to cook fresh chicken before it goes bad.

S&W Organic Black Beans – My girls’ go-to lunch is bean and cheese quesadillas, so we go through LOTS of black beans each week. These come out to about .85 per can – which is less than even Walmart’s organic beans.

Spices – We don’t always buy spices from Costco, but if we’re out of something when we’re making a planned Costco run, we’ll stock up since they are typically cheaper per ounce. It also means we don’t run out nearly as often, since the containers are so big!

Kirkland Organic Tomato Sauce – Another pantry staple of ours. So many recipes call for tomato sauce, and we also make homemade pizza on Fridays with our own sauce.

Stevia in the Raw – We use this in our coffee sometimes and occasionally to cook with in place of sugar. They have a huge box at Costco that lasts forever and winds up being cheaper in the long run than buying it at the grocery store.

Frozen Vegetables – We try to eat a green veggie with dinner every night, so I like to keep frozen veggies in the house for a quick add-on. Costco’s frozen broccoli and green beans come in bulk bags and they’re also organic, which is a nice perk!

Coffee – We basically decide when it’s time to make a Costco run based on how many K-Cups we have left! From time to time, we buy the Starbucks K-Cups, but lately, we’ve really liked the Donut Shop brand and they’re usually on sale, which is nice! I’ve done some price comparing, and you can sometimes find K-Cups for the same price at Target or on Amazon – but the biggest benefit of Costco is the quantity (so we don’t run out!).

Kirkland Organic Applesauce – My 3-year-old is a creature of habit and has been eating applesauce as part of breakfast since she was about 18 months old. Since we go through quite a bit, it’s nice to buy a big box (24 pouches) – and it’s usually cheaper per pouch than buying at the grocery store. And it’s organic!

Tortillas – The girls eat black bean and cheese quesadillas basically every day during the week for lunch – it’s literally the only thing they both agree on day in and day out and will actually eat. We recently started buying tortillas in bulk from Costco since we go through so many each week! If there’s a big sale at the grocery store, sometimes that can wind up less expensive, but it’s really nice to always have these in our pantry so I love getting them from Costco.

Aidell’s Apple Chicken Sausage – This one is a huge hit in our house – AND it’s Whole30-compliant if you care about that! I like doing a quick sheet pan dinner, with sliced chicken sausage, potatoes and green beans roasted together in the oven. So easy and healthy!

Goldfish – We try to limit snacks, especially ones that aren’t ‘healthy’ – but my girls do love Goldfish and it’s an easy one to grab as we’re walking out the door. The Costco size pack is pretty big but it comes with three separate resealable bags, and ends up being significantly less expensive per ounce.

Craisins – I occasionally like to make Paleo ‘Oatmeal’ and will top it with some dried fruit and nuts. Craisins are always a lot cheaper at Costco, especially if you catch them while they’re on promotion – to the tune of 64 ounces for $6! Such a steal.

Agave Nectar – I first started using agave when I was really into Tone It Up and now I still use it for things like baking or topping paleo pancakes, etc. Technically not Paleo approved (they suggest honey), but I like the mild taste of agave in recipes. It’s significantly cheaper at Costco than it is at grocery stores!

Kirkland Organic Maple Syrup – We actually haven’t bought this in a while, since we’ve been using agave syrup most of the time. But, when we do want to have some maple syrup in the house, we prefer to get it at Costco because the price point is amazing.

Nut Butters – Peanut butter sandwiches are in my girls’ lunch rotation since it’s one of basically three things my oldest will willingly eat for lunch. We like to buy JIF peanut butter at Costco – it’s a great deal. I will also buy Kirkland Almond Butter from time to time, which is actually Whole30 approved!

Nuts – We usually keep a bag of almonds or walnuts in the house for snacking or recipes, and Costco by far has the best deals. They’re great quality, too.

Laundry Detergent – With two girls, we go through a lot of detergent (especially with potty training recently!). We’ve always used All Free & Clear and they often have this on sale at Costco. There is also a Kirkland brand free & clear detergent, but we haven’t tried it yet. I’ve been happy with Costco brand, so I may give it a whirl next time we run out!

Protein Powder – I like to keep protein powder on hand for smoothies, protein pancakes or other recipes. Since going dairy-free, I have limited options, since most protein has whey in it. Costco pretty much always has a vegan protein option, so I snagged a container of Vega Vanilla Protein Powder a few months ago – the price per ounce was significantly less expensive than it was at Target.

With all of that said, we haven’t loved EVERYTHING we’ve gotten from Costco. Fortunately, Costco has an awesome return policy and you can return opened items if you aren’t happy with them. It makes it a little easier to try something new, since you don’t have to worry about using a bulk amount of something that you don’t like! Here are a few things we weren’t crazy about and probably wouldn’t buy again:

Anyone have favorite Costco buys to share? Leave a comment! I’m always on the lookout for great Costco products 🙂

These beauties went camping at the @schielemuseum

Finally took the girls back to our favorite place