This is the first time I’ve ever done two half marathons within 3 weeks of one another. I mean, I figured it would be totally fine…after all, I do double-digit training runs at least once a week. I almost did this race last year after I ran the Shamrock, but since I was still away at college, I decided it wouldn’t be best to make another trip home near the end of the semester. So, back in March (before the Shamrock…in which I had an awesome PR), I decided to go ahead and register for the Flying Pirate. 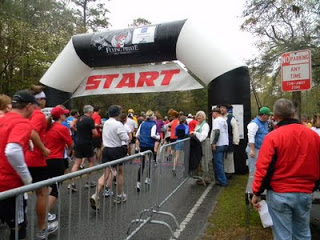 As I mentioned, I ran the best half marathon of my life in the Shamrock half a few weeks ago, and I was optimistic about this race as well. However, I had been having weird foot pain ever since I finished the Shamrock, and I started to doubt myself running this race! I took the week after the Shamrock really easy…that week I did yoga twice and ran a total of 5 miles…the entire week. I continued to have foot pain, but the following week, I stepped up my training to keep my endurance up. Admittedly, I’m pretty determined, so I kept running even though my left foot was in serious pain (it feels like I strained a ligament possibly?). Then, last week, I did yoga and ran a few times, making sure to get in a 10-miler, just to be sure that I would be able to run that far with my foot hurting the way it has been. It didn’t bother me so much, so I became a little bit more optimistic about running the Flying Pirate… 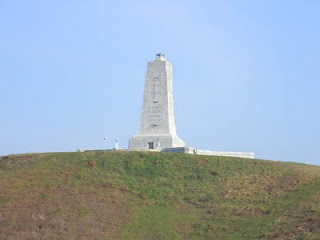 We made a weekend out of it and rented a cottage since the race was at the Outer Banks. I noticed that my foot was still hurting, but nevertheless, I was going to run this race! I did not let myself get caught up in setting “goals” because I didn’t want to push myself to hard and injure myself even worse. I was strangely calm and not too nervous, probably because I wasn’t concerned with beating my PR 😉

I started off fast, like a 7:20 pace…and quickly realized that I was not going to keep that up with my foot hurting the way it did. I settled into an 8:30 pace and just enjoyed the scenery (running at the beach, after all). Around mile 6, I seriously thought I was not going to make it 13.1 miles…I thought I’d have to either walk or drop out. But I pushed through it, and I didn’t notice the pain as much. Until Mile 10, that is. At Mile 10, the race turned into a trail race…on muddy, rocky, and super-hilly path…all the way until the end of the race. My pace slowed considerably, because the softer ground and hills really bothered my foot…so I threw out my hopes of finishing in under 1:50. I was on target to do that until I discovered we’d be “off-roading” it. haha. 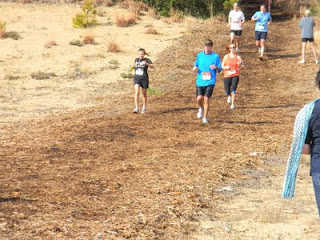 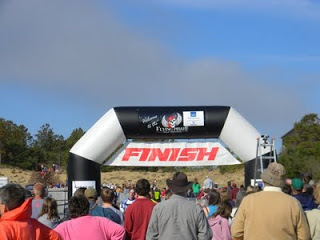 The last half-mile or so turned into a wooded area with a mulch path and insanely steep hills (who knew there were hills like this at the beach?!), which would have been a lot of fun had I not been injured! At this point, I just wanted to finish this race…and finally, I did. The very end of the race was down a steep hill that led to the finish line. Final time? 1:52! So even with an injury (that I obviously didn’t make any better…haha), I still did pretty decent. I can’t complain. All in all, it was a fun race with a good course. The volunteers were great and the post-race party was really nice. There was no limit on the amount of food and beer that runners could have, and there was quite a bit of variety of healthy (and not-so-healthy!) foods. I’d definitely do it again, and hopefully I won’t have any injuries going into the race! 😉 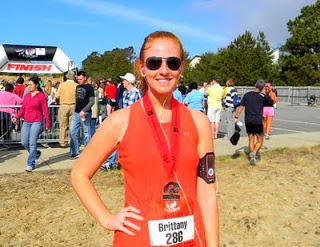