Oh Galway. I don’t even know how to describe how great this city is. I’ve wanted to visit Ireland for years and always hoped to see the traditional and authentic culture that makes Ireland so unique. Of course, as I mentioned earlier, Dublin was not quite what I’d expected. It was far more urban and modern with a few traditional qualities thrown in. That’s why, ever since we first arrived in Ireland, I looked forward to our stay in Galway. Honestly, I didn’t know much about Galway before staying here, but I had a notion in my mind that it would be much more of a traditional Irish culture. Well, it certainly didn’t disappoint! From the moment we stepped off the train, we were surrounded by a cultural charm, a small Irish city with lots of tradition all around. 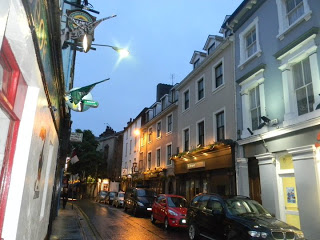 Despite asking for directions to our hostel, we ended up wandering the (wrong) street looking for it. A local stopped and asked us what we were looking for (we’re quite obviously tourists, with 20 pound bags on our backs…ha) and that was the first sign that the locals in Galway are much friendlier than locals in Dublin. I had one goal in mind for our weekend: go to a pub and listen to traditional Irish music. So we did. We asked the locals which pub had Irish food and music, and we were pointed in the right direction. The music was loud and inviting when we stepped into the pub, and the alcohol was flowing quite early in the night! Although this is a country proud of its Guinness, neither Michael nor I really find it enjoyable (sadly, I know). So we settled for Irish coffee and rum with sparkling orange. We considered having bacon and cabbage for dinner, but ended up getting vegetable soup…and fries. What a combination. Eating peanut butter and banana sandwiches for every meal will make you crave weird food combinations every now and then! 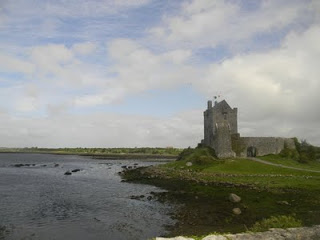 Saturday, we headed out on an all-day tour to the Cliffs of Moher…or as they are known in The Princess Bride, the “Cliffs of Insanity.” Yes, I’m a huge fan of that movie, and no, the Irish do not associate the Cliffs with it. We asked our tour guide and he said that the Irish tend to focus more on the history and preservation than on pop culture, basically. So, completely opposite of the U.S….haha. The Cliffs were breathtaking. This was one of the main reasons why I’d always wanted to go to Ireland, along with the cultural experience. It was amazing to these natural-made cliffs with the Atlantic Ocean breaking against the cliff edges. If geography fascinates you, its definitely worth taking a trip to this part of Ireland. First, we drove through The Burren (limestone mountains) to get to the Cliffs, which was incredible in itself. After spending time at the Cliffs, we drove along the coastal road (reminded me of the Pacific Coast Highway…but less sunny…ha). I would say that this excursion was the highlight of our trip so far.
Next, we are headed to Cork for our last four days in Ireland. I’ll be sad to leave this beautiful country, but excited for the next places we are traveling to (like Amsterdam, on Wednesday)! While in Cork, we plan to head to Blarney Castle (touristy, yes…but it’s worth it. Not everyone can say they’ve kissed the Blarney Stone!), explore a new Irish town, and hang out with some locals. I hope Cork will be as fascinating as Galway!
-xoxo