Yesterday, I ran the Shamrock Half Marathon for the third time in a row. Its always a fun race, and I look forward to it every year! The first year I ran it, I finished in 2:09, which was pretty respectable for a first timer! Last year, I had a goal in mind: finish in under 2 hours….I dominated that goal and finished in 1:55! This year, I did have a goal in mind…well, maybe a few goals. My comfortable goal was to finish in 1:50, which I didn’t think would be too difficult. My far-reaching goal was to finish in 1:45……

I run a lot…at least 6 days a week, averaging 35-40 miles per week. My day just isn’t complete without getting in a run! I don’t follow a training plan, though, and never really have. I used one as a guideline for my first half, but never ran over 8 miles in a training run before the race because I ended up with an injury a few months before the race! I’ve realized I’m just not one to stick to a strict schedule…I like to run when I want to and how far I want to…a la SkinnyRunner. 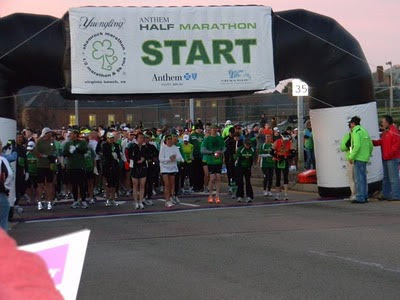 So I went into this year’s half marathon without putting too much pressure on myself. After all, I’ve stretched myself thin with law school, running, socializing, and trying to have a little bit of fun. So, I didn’t want to set too high a goal and then not be able to accomplish it! Yesterday morning, I woke up and I wasn’t overly enthusiastic to be awake at 4:30am…I was wary of how well I would run, to say the least. I wasn’t running late, and had time to unwind before the race…but I didn’t think too much about the fact that my exhausted body was about to run 13.1 miles. No pressure, right? 😉

I started off pretty fast but steady, and I kept checking my Garmin…I was holding a sub-8:00 pace consistently. Never in my life….hah! I was feeling good, so I kept it up. I got to mile 4 and pulled out a 7:36 mile…don’t know where that came from! I made sure to keep myself fueled with carbs…two Gatorade stops and took SportBeans 3 times throughout the race. Those little things really gave me a boost! When I slowed down (because God forbid an 8:05 pace being slow…), I would pop a few SportBeans and my pace would pick back up to the 7:40s-7:50s.

I had started off in Corral 2, and of course the 1:45 pacer was at the back of Corral 1, which started in a wave about 2 minutes before my corral. For a while I didn’t see the pacer, but I think when I got to Mile 3, I caught a glimpse of him. That’s when I knew I had a chance. Yes, somebody has big dreams here….I decided to keep up with the 1:45 pacer at Mile 3! Somehow, I managed to keep him within my sight the entire race, and I knew that starting about 2 minutes behind him put me about 2 minutes ahead of a 1:45 finish…or something like that. Math isn’t my strong suit….

When I got to Mile 12, I knew it was all or nothing. My feet started to ache and I could have easily slowed down a bit, but I made it THAT far and wasn’t about to give up my “far-reaching” goal! I’m extremely competitive and if I crossed that line in 1:46, I would have been disappointed. That’s horrible, I know…but just the thought of being SO close would have driven me crazy! Like, if I had crossed the line in 1:50, I would have been satisfied that I accomplished my “easy” goal…but something about finishing in 1:46 and being so close to my “far-reaching” goal would have made me frustrated! So I forged on….. 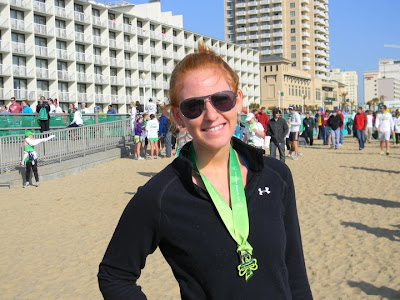 Once I got to Mile 13, I knew I had it…granted I could keep my pace! 😉 We crossed over from the road to the Oceanfront boardwalk, and I heard a volunteer yell “6 more blocks”…it was game on at that point! I gave it all I had and crossed the line in 1:43:59! My legs never felt so….tight…..and sore! But I did it, and now I’ve accomplished yet another goal 🙂 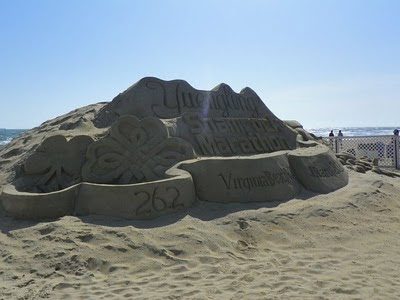 I went into this race with no intention of actually finishing in less than 1:45 (which has been my all-time goal for a half marathon finish time)! I knew that I would go for it at some point, but I didn’t know yesterday would be the day. I’m so grateful that I have the ability to run and accomplish goals like this! It looks my next goal is going to have to be a marathon….since I just accomplished the biggest running goal that I had thus far 😉

I can tell I ran extremely hard and pushed myself, because I am SO SORE today! My legs and feet hurt and I just feel achy….but I will say it was totally worth it. Still feeling that rush of accomplishment and it gives me reason to believe I can accomplish anything I truly set my mind to! 🙂