It’s hard to believe it’s already been over two months since Brynn was born – and I’ve been meaning to finish her birth story for a while now! Though I really can’t complain about any of my pregnancies, I will say that the third time around was probably the most challenging thus far. Mainly because I was consistently nauseous from about week 6 all the way until she was born on August 1st – it really didn’t let up at any point in my pregnancy. Nausea (and exhaustion!) aside, I’m very grateful to have had another textbook pregnancy with no complications. Here is Brynn Eleanor’s full birth story. 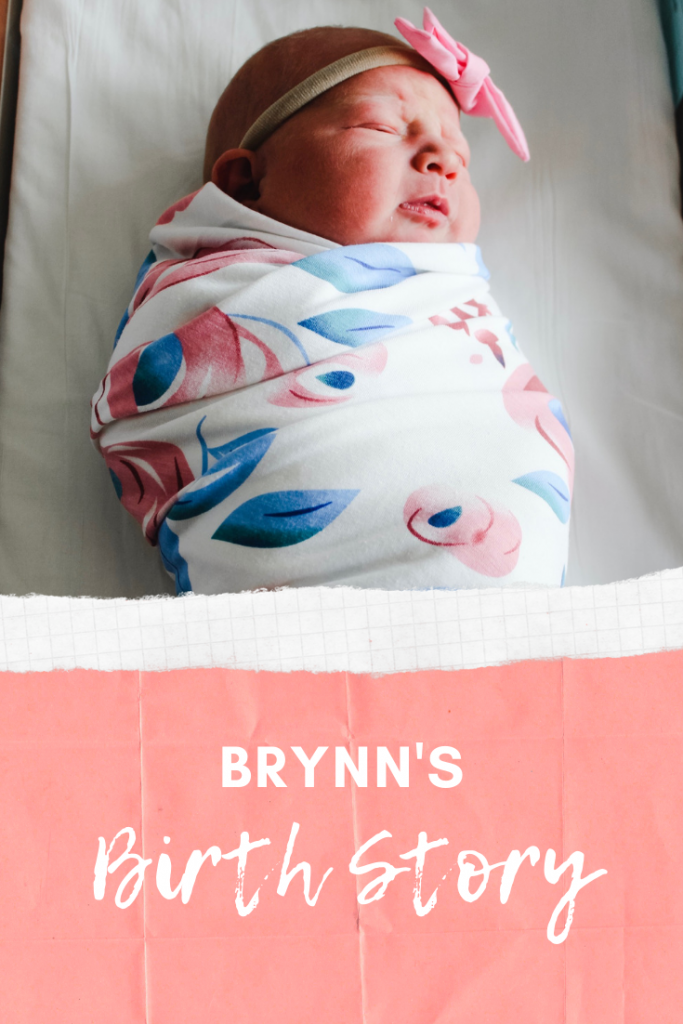 With so many things going on the past few months, including selling our house and moving into a temporary apartment and then Michael taking a job in Charlotte and planning a big move, I was so busy with life and the girls and not able to focus much on pregnancy. I typically spend the last few weeks doing all the things to get labor started naturally, but given my history of being induced with both of my older girls, I figured it was a slim chance that those things would work this time around! After talking to my doctor, we decided to follow a plan similar to the one I had with Blakely – a planned induction at 39 weeks, if nothing happened before then. I’ll be honest, between being busy, exhausted and just not believing anything would get labor started, I barely made an effort to do things like bounce on an exercise ball, walk or drink raspberry leaf tea. And no surprise there (ha!), but I did not go into labor naturally and went in for my scheduled induction on August 1st. 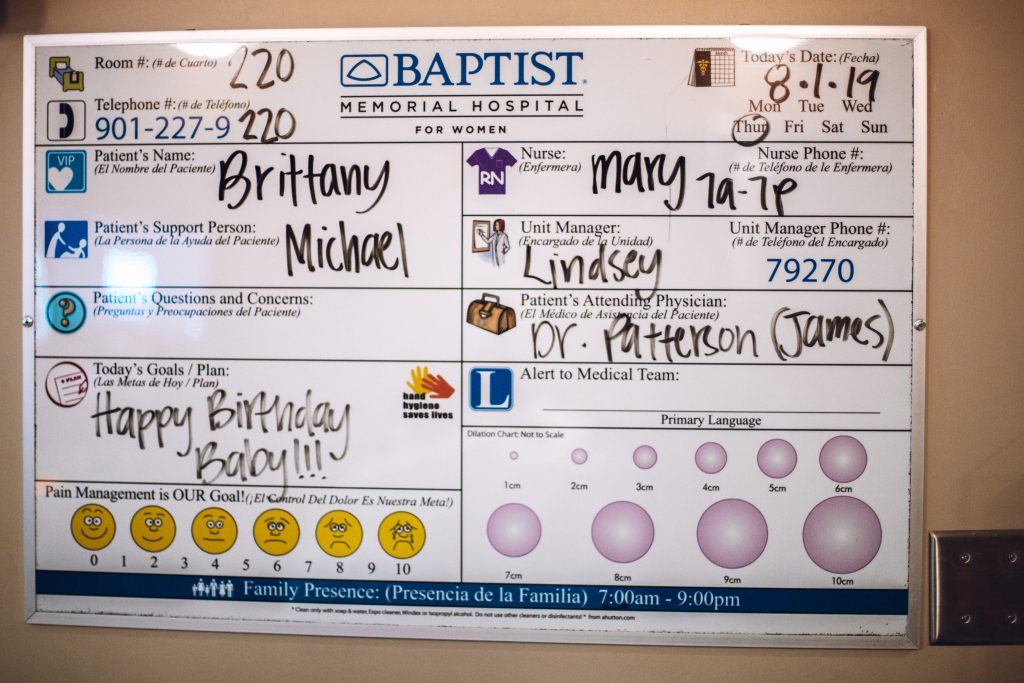 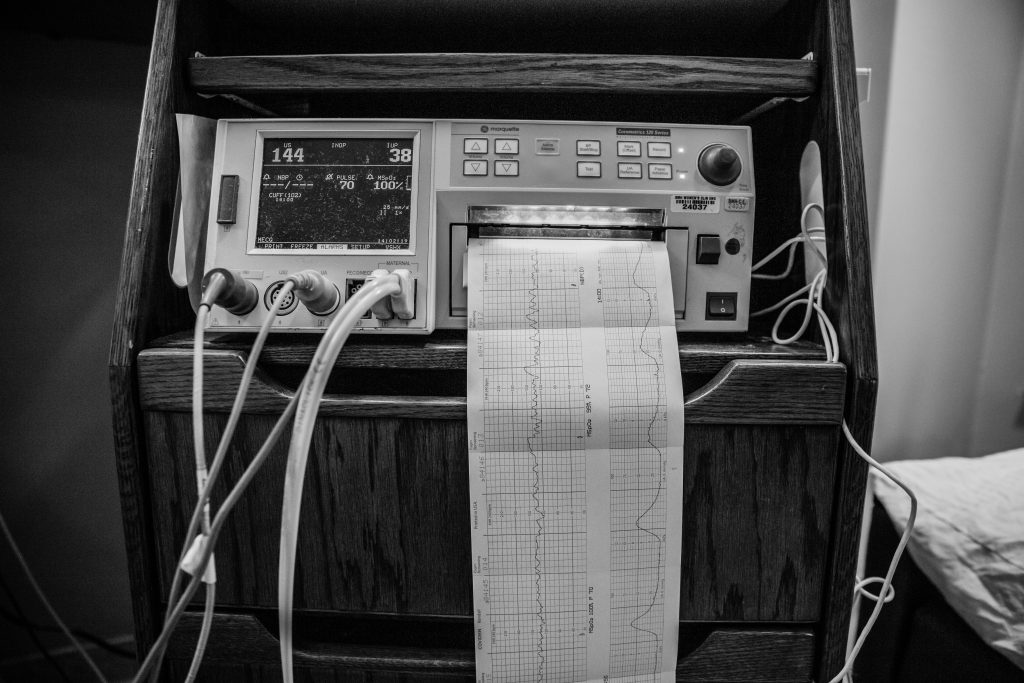 When we arrived at the hospital, we were the only ones there, but within 15 minutes, a lady in active labor came rushing into the waiting room and it was obvious she was in pain. I know this is crazy, but I’ve always somewhat hoped my water would break dramatically and I’d go into labor on my own, just to have the experience…but then with how fast my kids have been born WITH an induction (which usually delays the process), I’m sort of glad that wasn’t the case…definitely didn’t want a situation where I had a baby on the side of the road without an epidural! 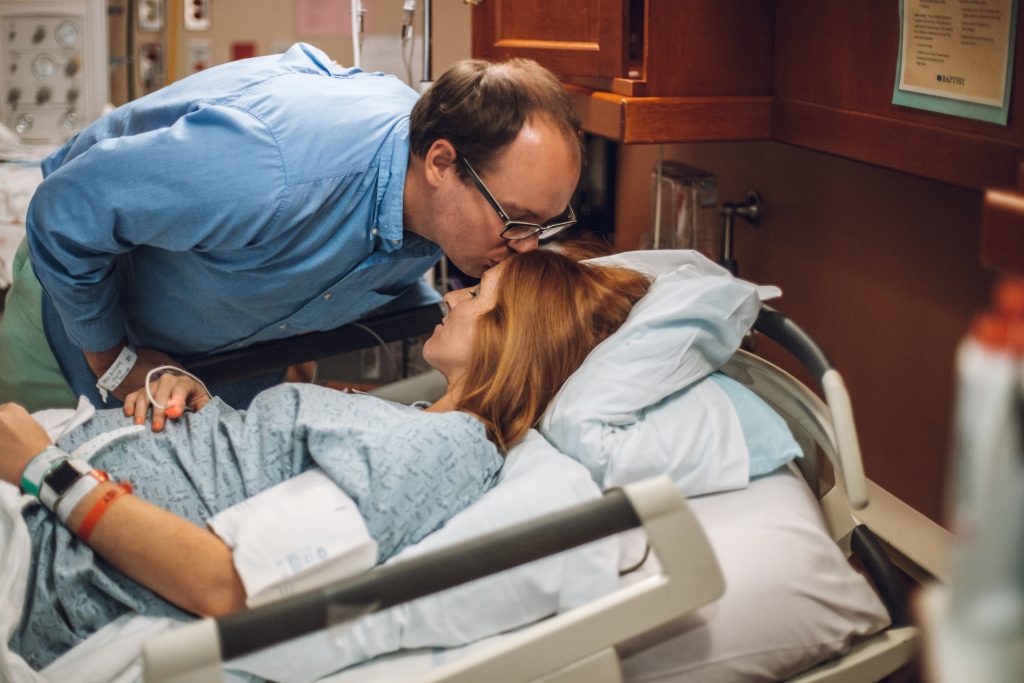 Several other ladies came in while we were still waiting, a few who seemed to be in labor and a few others who were there for inductions as well. I am always nervous on induction day that I’ll get bumped if the hospital fills up (it’s been a close call all 3 times for me), so the more women I saw come in, the more anxious I became. Finally, they took me to my hospital room and started the induction process around 8am. They gave me an IV but didn’t start the Pitocin right away, and I noticed I was actually having some small contractions on my own and I was about 3cm dilated…so, off to a good start. My doctor stopped by and checked on me and went ahead and broke my water and then they started my Pitocin on a super low level. For the first hour or two, I didn’t really notice any huge changes so they kept increasing my Pitocin level until things started to hurt. My back was basically constantly cramping but I wasn’t feeling contractions that intensely in my stomach yet – still uncomfortable though! My goal was to ask for the epidural earlier this time around because I was in so much pain by the time the anesthesiologist arrived in my second pregnancy that I was almost in tears.

I ended up asking for it a little too early this time and my nurse wanted me to wait a little longer, so I made it another 30 minutes before things picked up significantly and I wasn’t able to talk through contractions. I still had to wait 30 minutes to get through a bag of fluids, but luckily the anesthesiologist arrived super quicky after that and I didn’t have to wait around forever like I did with my first two babies! The epidural didn’t take on my right side very well (which also happened last time), but after laying on my side for a little while, it finally evened out. I felt so much relief at this point and was able to relax a little for the first time all day. I was trying to keep up with my progress since we had a birth photographer coming to take photos and I didn’t want to wait too late to text her – since the epidural, I’d gone from 4cm to over 7cm in just 30 or so minutes – so I obviously texted her and told her it was probably time to head in!

She arrived at 1:45ish and I was about 8cm then. I literally felt nothing, so we were just chatting away until my doctor arrived to check me around 2:25 and he immediately said it was go time. The nurses got the room all set up and then I pushed maybe 3 times through one contraction and Brynn Eleanor was born at 2:52pm! It was such a smooth process and I got to hold her and have skin-to-skin immediately (which, if you read my first birth story, you’ll know this is such an important thing to me!). 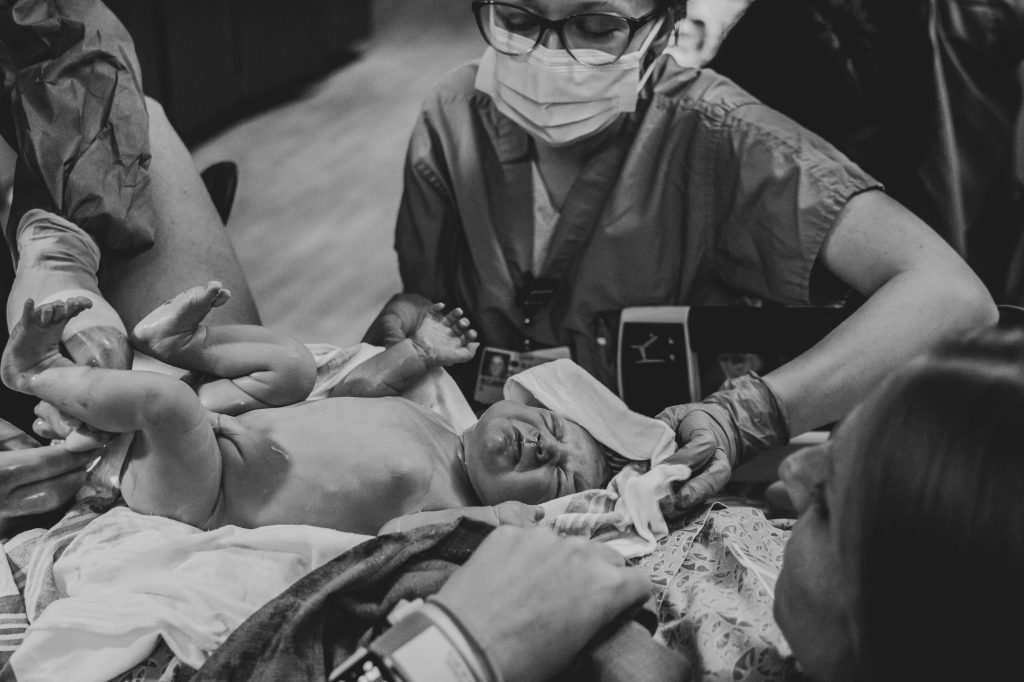 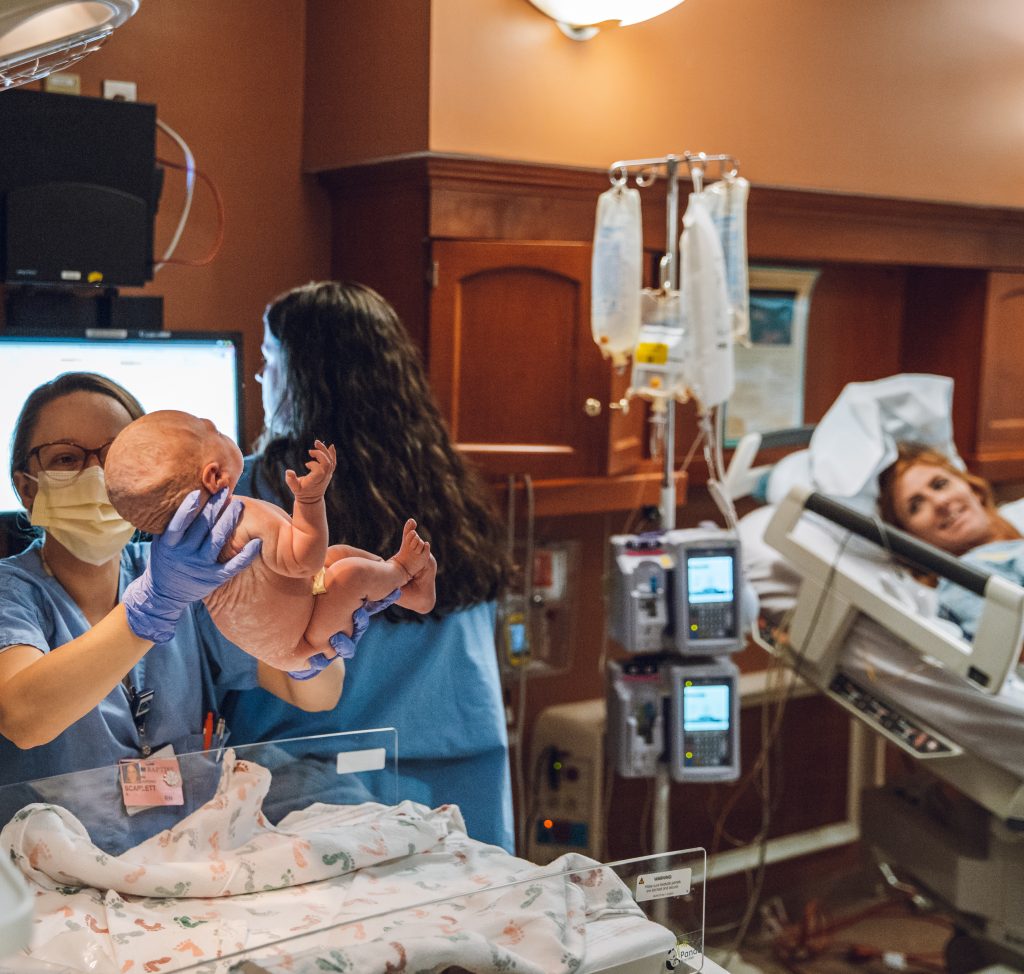 Brynn was 8 pounds, 1 ounce and 21 inches long and she looked like a mix of Blair and Blakely when she was born – though now, we think she strongly resembles Blair! 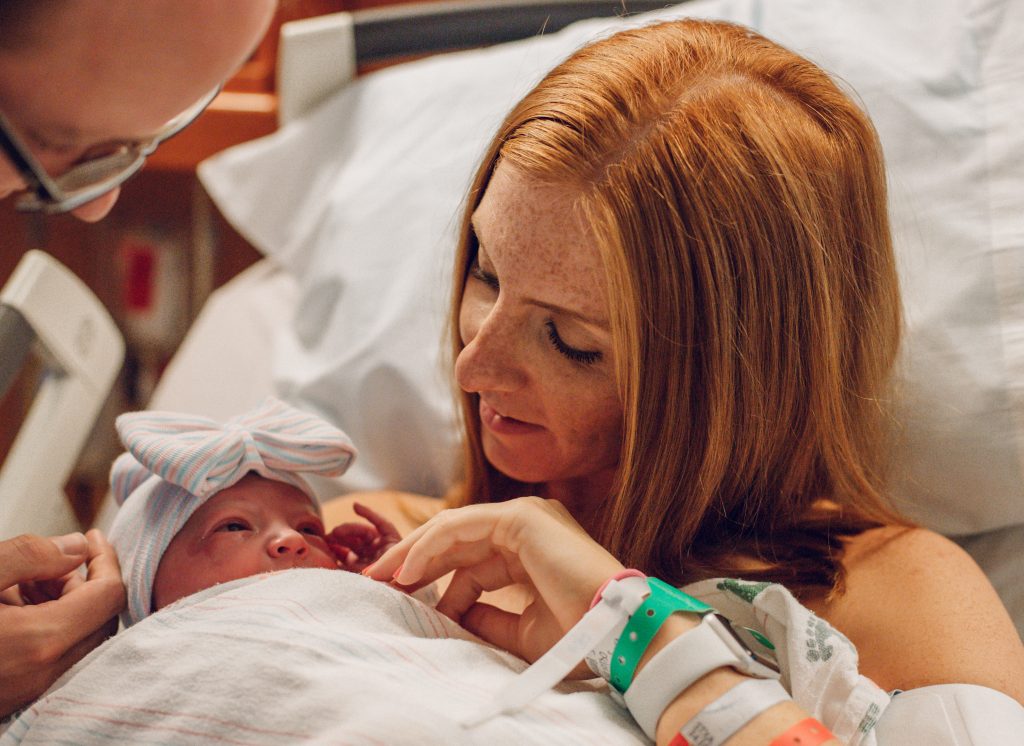 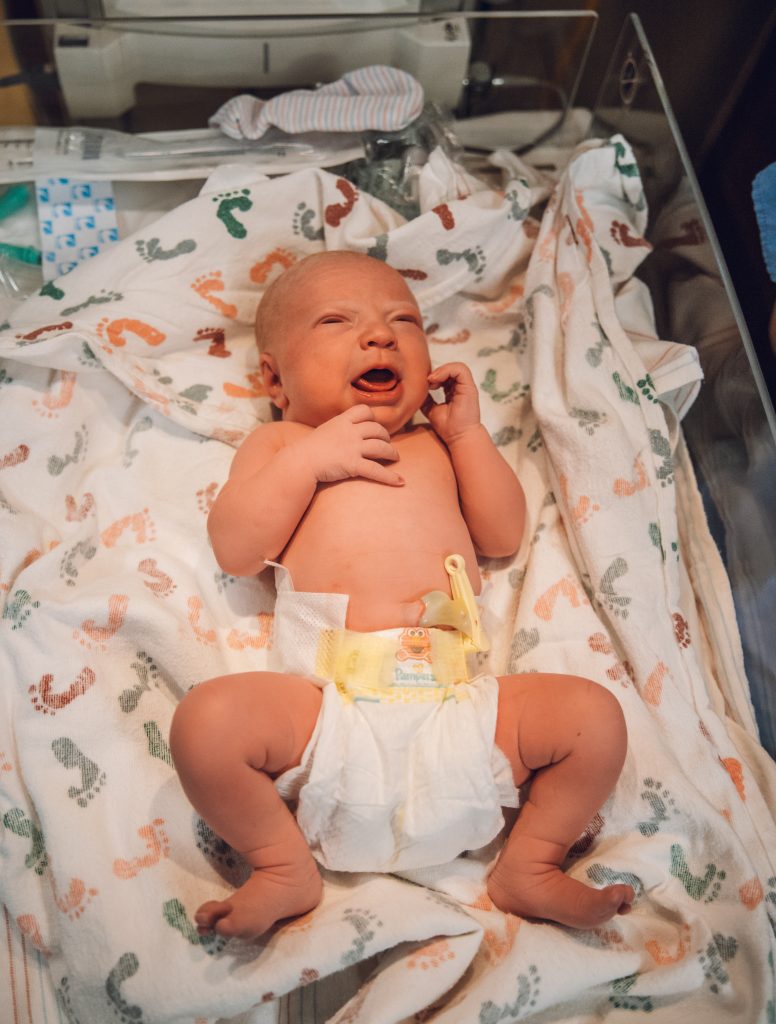 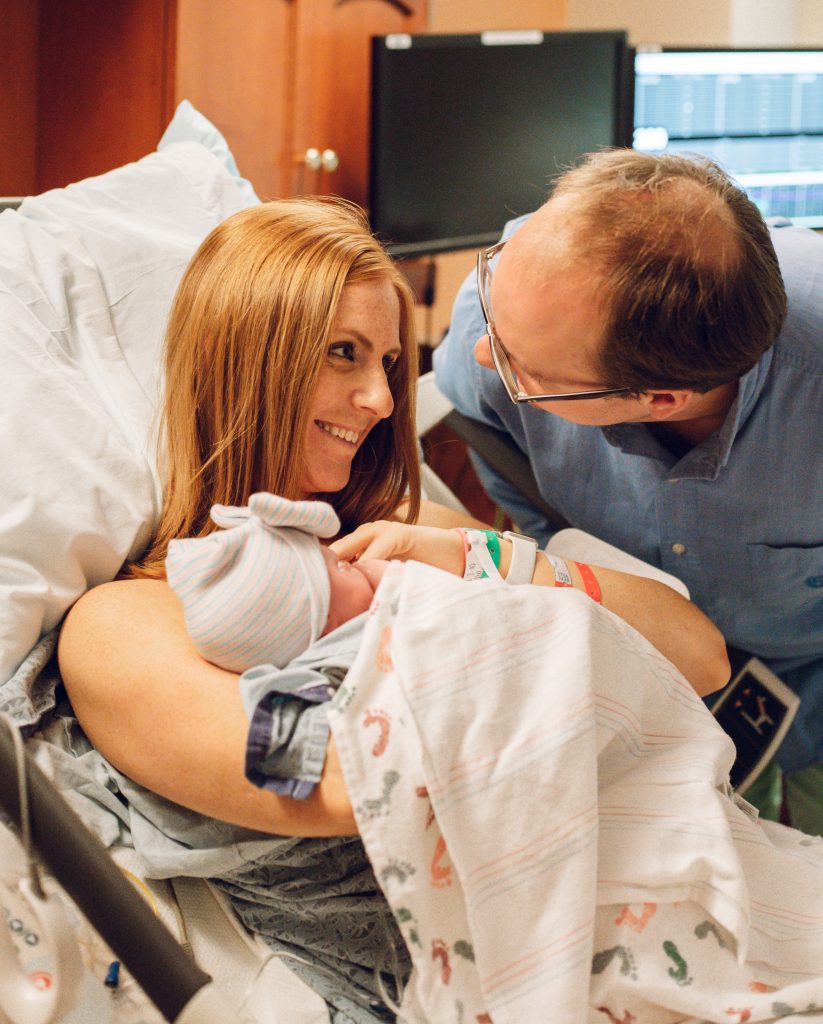 Once we got settled into our postpartum room, the girls came by with my parents to meet their baby sister and it was the sweetest. They were both smitten with Brynn and wanted to hold her and love on her! 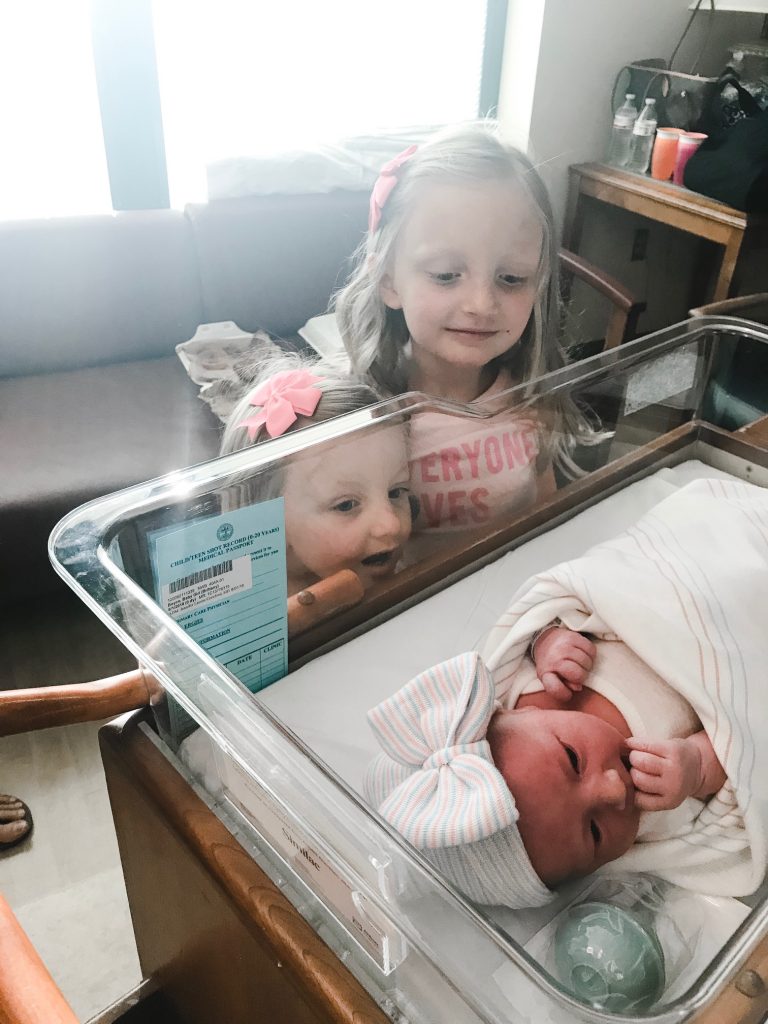 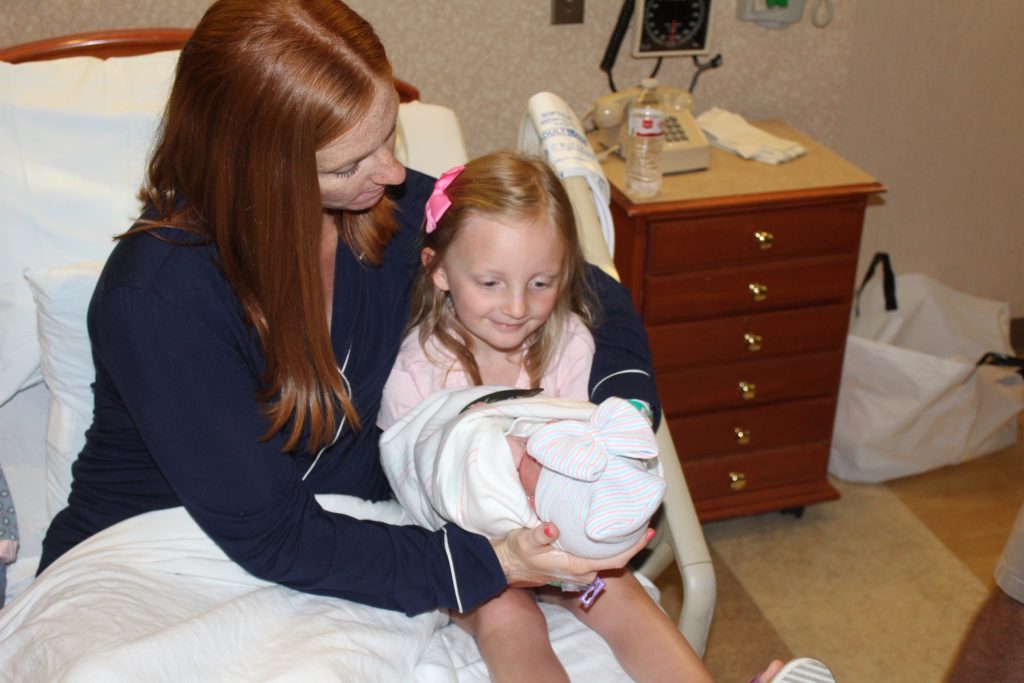 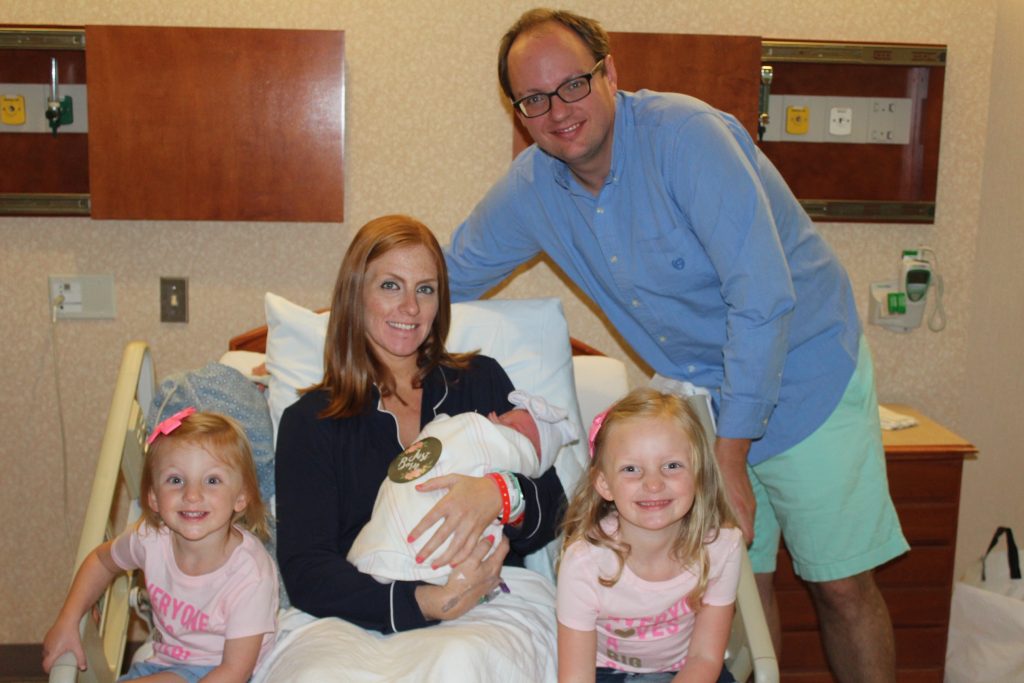 Like last time, I went home after just one night in the hospital (soooo different from my first birth, where I was afraid to leave and have us be on our own with a newborn! ha). In true third child fashion, we stopped at the grocery store on our way home to pick up a few things (including mimosa supplies, because, why not?). It really is crazy how much different everything feels from baby #1 to baby #3 – Brynn just fit right into our little family and it’s like she’s been here forever! It’s been so special watching the big girls interact with her, they just love her so much and even 11 weeks later, they always want to be around her and help take care of her!