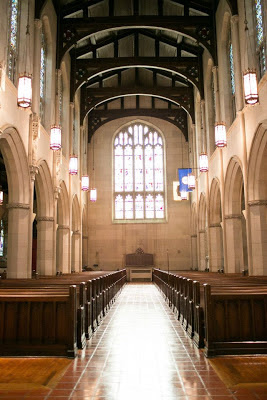 When we planned our wedding ceremony, we both knew that we wanted a meaningful service. Many weddings that I’ve been to have had very short ceremonies, and while that works for some people, it just isn’t what we wanted! We spent 10 months planning for the big day, so we didn’t want the day to fly by too quickly! After meeting with our priest several times and discussing the ceremony, we decided that we wanted to offer communion to our guests. Since we both grew up in different churches, and our wedding was being held in an Episcopal church – we decided that communion would be something that would bring together all of our guests and each person’s religious traditions. 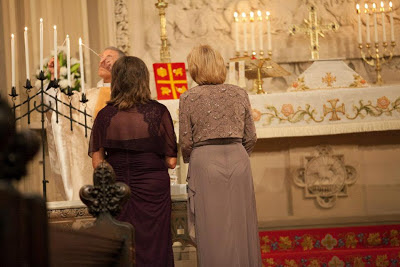 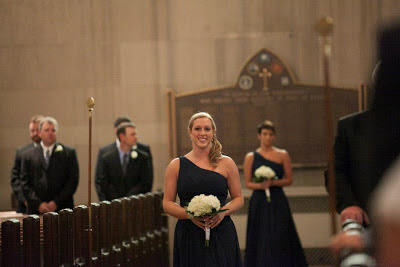 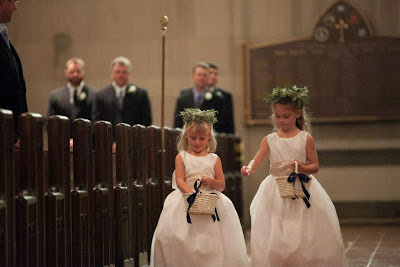 Our ceremony was very traditional and elegant, which was something that we both desired. The church was beautiful, so we decided that it didn’t need much decor. We simply had candelabras, a unity candle, and two floral arrangements on the altar. My dress, my bridesmaids dresses, and my mother & MILs dresses were all floor-length, and I had a cathedral-length veil. As we were waiting to begin walking down the aisle, I asked my bridesmaids, my dad, and the wedding coordinator if I should wear the veil’s blusher over my face. After hearing their opinions, and keeping with my desire to be “traditional”, I ended up wearing it. I’m glad I did now. 🙂 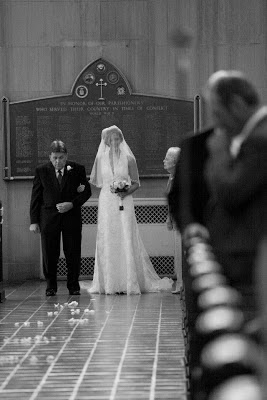 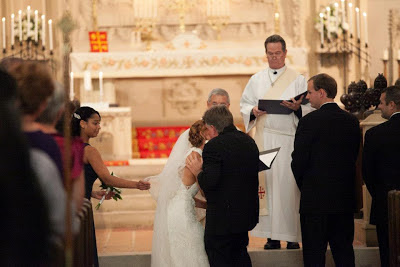 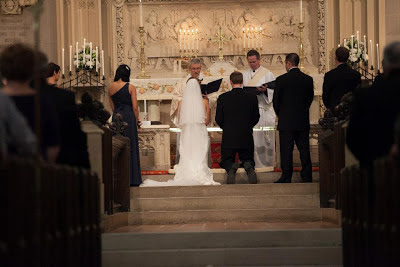 Because of our decision to do communion, along with the traditional Episcopalian wedding service, our wedding actually lasted quite a while! Forty-five minutes, maybe? All I know is that it still flew by, to me at least! I realize that I’ve made it sound like my wedding day went perfectly….however, like everyone warned me – that’s an impossible feat! Something will ALWAYS go wrong, but just let it go and continue to enjoy the day. In our case, we were able to do some damage control! You see, us girls had been getting ready in one of the big fellowship halls in the church, and we had all of the important things with us – attire, shoes, makeup, mimosas, …the wedding rings…etc. My photographer wanted mine & M’s rings to use for a few photos, so she borrowed them for a while. I told everyone in the room that we needed to get the rings to the Best Man once my photographer returned with the rings. Well, she returned with the rings, and put them back…then whisked me away to take a few of the cute holding hands pictures that M & I wanted. After that, as I was headed back to the fellowship hall, my wedding coordinator told us we needed to get ready to go in 5 minutes! I was turning into a ball of nerves because my veil wasn’t on, my shoes were hurting my feet, and I needed a touch-up before walking down the aisle. All of that happened quickly, and the next thing I know, I was waiting in the front bell tower entrance with my bridesmaids, flower girls, ring bearer, my dad, and the wedding coordinator. We were all excited and a little nervous about walking down the long aisle, and we were laughing and joking with the cute ring bearer & flower girls…they were adorable (and excited too!). As my bridesmaids began walking down the aisle, I had a sinking feeling that the rings never made it to the Best Man. I voiced my concern (read, worry) to the wedding coordinator and my dad, who both waved it off and said “of course they have the rings!” You might not be able to tell in the photos, but I was extremely worried for about the first 10 minutes of our ceremony, up until the Blessing of the Rings, when I knew that we might all be in for an awkward laugh…. 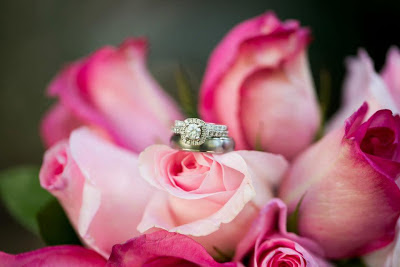 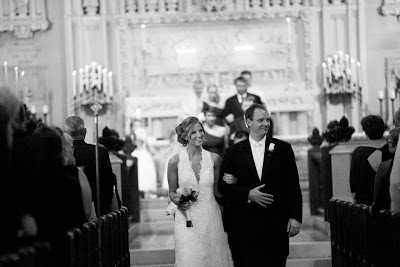 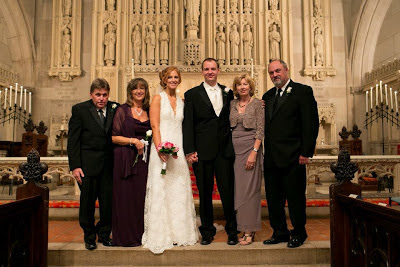 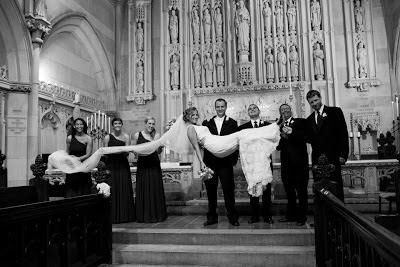 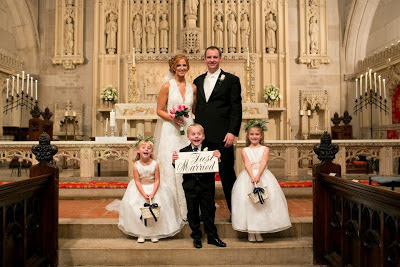 By the grace of God (a true miracle…), just before I walked down the aisle, the assistant priest asked the Best Man if he had the rings, to which he responded “no.” My brother-in-law, one of M’s groomsmen, ran off and searched high and low until he found the rings (in the fellowship hall, where they were left, of course!). He got back just in time, and the ceremony ended up going off without a hitch. I had been worried for those first 10 minutes, because I didn’t know the whole story at the time, that he had gotten the rings. Sigh of relief! Luckily, our guests never knew that story – until now, of course! The few people that we had told just thought that one of the groomsmen had to go to the restroom when they saw him leave the altar suddenly and return a few minutes later! So now you all know that what appeared to be perfect (yeah, right…haha) was in fact, not so much! In reality, though, it all turned out wonderfully – and we didn’t have to do a “fake” Blessing of the Rings…which is what I thought was going to happen. Stay tuned for a Reception post…or two!