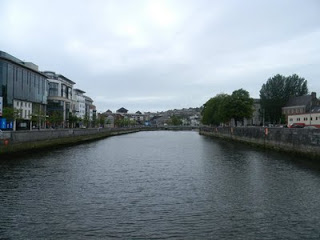 While this may be a broad assumption, I will say that Cork, Ireland has been (and will be) my least favorite stop of this entire trip. After being in Dublin, where there was quite a lot of attractions to see and then being in Galway, where I found the traditional Ireland that I had pictured in my mind, Cork was less than fascinating to me. We arrived in Cork, after three train changes, and our immediate impression was that this was not a glamorous city. I personally found it to be very dirty, with litter and graffiti almost anywhere you look…highly disappointing. 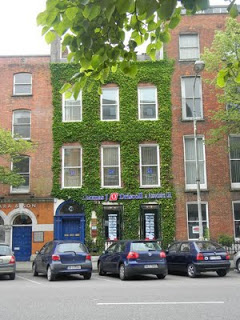 To make our stay in Cork even more interesting, we were “couchsurfing” with an Irish local. Admittedly, he was a nice host, who showed us some fun in Cork…just about the only fun we had while we were there! He took us out to a local pub/bar on a Sunday night (who knew people were raging on a Sunday?!), where we met a bunch of new Irish friends and danced to some Irish music played by a local band (ever seen P.S. I Love You? It was just like the pub and band scene from the movie!). Then we got invited to the “after party”, where Michael taught an Irishman how to do an Irish Car Bomb (nope, Irish people don’t do those…true story) and I got hit on by several Irish guys.I think my hair color threw some of the guys off…I do look like an Irish girl…until I start to talk 😉

The biggest reason we decided to visit Cork was to go to Blarney Castle, which is in Blarney, about 5 miles outside of Cork city. Our lovely host told us it was “only 8k” to get to Blarney, and asked if we were going to walk there. Never one to turn down exercise, I said sure and went along with it. The first half was up a brutally high hill (at least the views were pretty!), and the second half had no sidewalk. So we were on the side of a busy road that had no shoulder, having to stop every time a car was headed toward us, in order to not get hit. Adventurous? Yes. Fun? Ehh, not so much at the time. To add insult to injury, when we were about 5 minutes outside of Blarney, it started pouring rain…and hailing. Luckily, we did have umbrellas, so only the bottom half of our jeans and legs got drenched. haha. Once the rain started, I knew we had an interesting story that we wouldn’t forget.I mean, (a) who can say they walked all the way to Blarney Castle from Cork (because only idiots like us would do that…HA), and (b) it was like a scene out of a movie: bad luck, then cue the pouring rain (more bad luck). 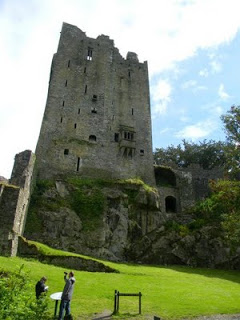 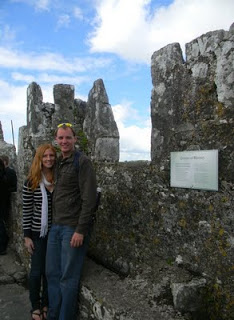 Once that fiasco was over, the rest of the day ended up being gorgeous and we had a great time exploring Blarney Castle, almost forgetting about our insanely bad luck getting there! The castle itself was gorgeous, but the gardens really stole the show. With a bright blue sky as the backdrop (haven’t seen too many of those since we got to Ireland!), the grass seemed to be a radiant green color and the flowers were extra vividly colored. I think I took more photos of Blarney than I took of the entire cities of Dublin and Galway! And kissing the Blarney Stone, well, that just made it even better. Not everyone can say they’ve done that…which makes it even more neat! I admit that I was terrified to lay down backwards and lean over the turret’s edge…heights are not my friend! Its safe to say that Blarney is what made our stay in Cork worthwhile. I expected it to be quite “touristy”, but it really felt authentic and not nearly as commercialized as a historical site in the U.S. would be. 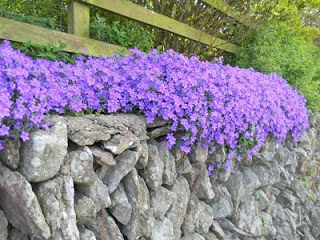 While we had planned to spend three nights with our host in Cork, we found out that the buses and trains to the airport do not start running early enough in order for us to catch our 6:00am flight on Wednesday morning, so we are currently camped out in the airport ALL night. Talk about an exciting evening. ha. Sadly, we were actually excited about spending out last night here in the airport, because we did not find Cork to be a very exciting destination. I hate saying that, but it is unfortunately true. I compared Cork City, Ireland to Detroit…enough said.

I can’t say ALL bad things about this place though, because we did meet some really cool Irish friends and partook in some authentic Irish things, like drinking and dancing to Irish music at an authentic pub. I’ll take it. Now we get to look forward to our next adventure: getting around countries that speak languages other than English! My biggest concern is getting around The Netherlands and Germany. I’m an intermediate French speaker, and from that I can understand some Italian, and I’ve had some experience with Spanish, so I am not overly concerned about those countries. Since Amsterdam, Berlin, and Munich are our next stops, I guess we’ll be finding out real shortly how well we can get around  those cities! Only a little bit longer before our flight leaves…maybe I should get some sleep…on the airport benches. My next blog post will be from Amsterdam! 🙂