With every day that passes, I feel more and more comfortable with taking care of an infant (no longer a tiny newborn…so sad!) and it’s getting easier. Not to say it’s been too hard, but definitely an adjustment! The first two weeks were pretty rough, but not overly so. It just took time for all of us to adjust to the new normal.

I barely slept the first five nights Blair was home – maybe 45 minutes to an hour at a time, in between her feedings. I felt like I needed to watch her the entire time, and I even felt uncomfortable leaving her alone for a single minute while I ran upstairs or downstairs to grab something during the day. (Side note – oh, how things have changed…I can now sleep soundly for as long as she’ll let me sleep!)

That fifth night was rough. We had talked about watching a movie and snuggling on the couch, and I fed Blair at 7, confident that she’d sleep afterwards. Well, the joke is on us for making ‘plans’…she cried and cried…and cried some more. When she wasn’t eating, she was crying. This lasted from that 7pm feeding until 8am the next morning. At some point during the night when none of us were sleeping and all of us were crying, I seriously considered taking her back to the hospital nursery and asking them to ‘fix’ her, because I was sure she was broken. Luckily, my mom had already planned to come over Tuesday morning to stay with us for the rest of that week – it felt like a lifesaver after literally pulling an all-nighter! 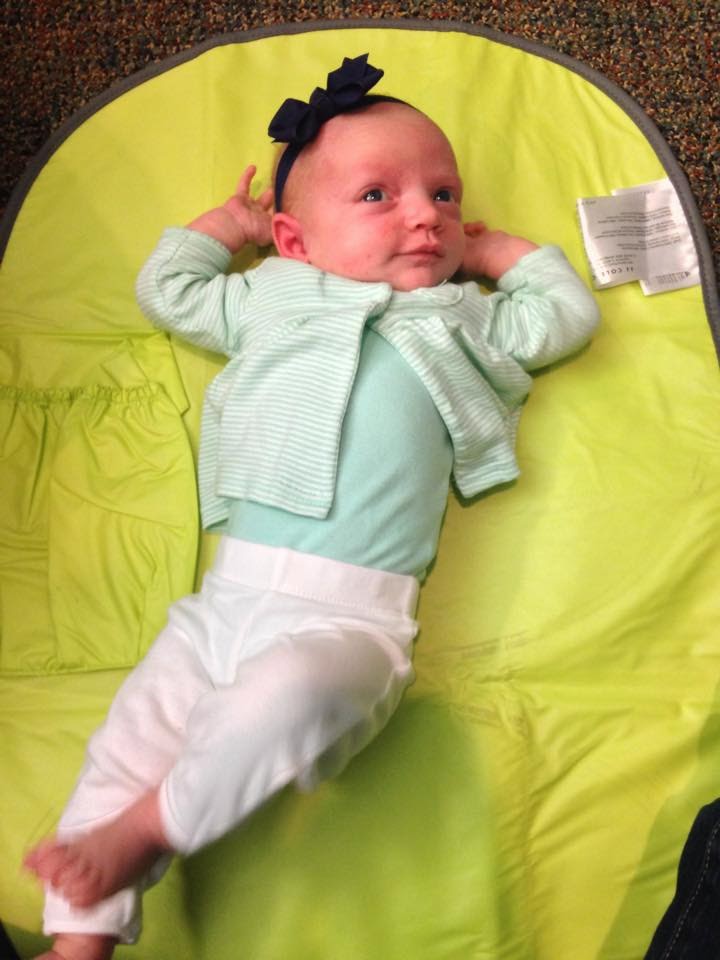 After that crazy night, things started to improve. Blair cried a little less, and we discovered she liked motion and liked to be swaddled, so we went out and bought a swing and a Halo Swaddle – both of which are still being used every single day. She even slept a 4-hour stretch during week 2! By the end of the 3rd week, she was sleeping 5-6 hours a night – definitely not complaining about that.
In the first week or two, I kept focusing on how different life felt – after all, having a tiny newborn really changes your routine (what routine? ha). However, I started to realize that it didn’t have to change much – we could still do most anything that we did before she arrived. After all, we could just put her in the car seat or stroller and take her wherever we wanted to go. It doesn’t hurt that she falls asleep during a car or stroller ride! At week 4, we started jogging with her in the BOB stroller – it felt amazing to start working out again, even if it was really slow at first. I even tried a treadmill workout once that week, and I started to feel even more back to normal. For me, getting back into my usual routine has really helped. Plus, now that I’ve been a mom for six weeks, it’s starting to feel ‘normal’ and it feels like she’s been here for a long time, even though that’s not really the case! 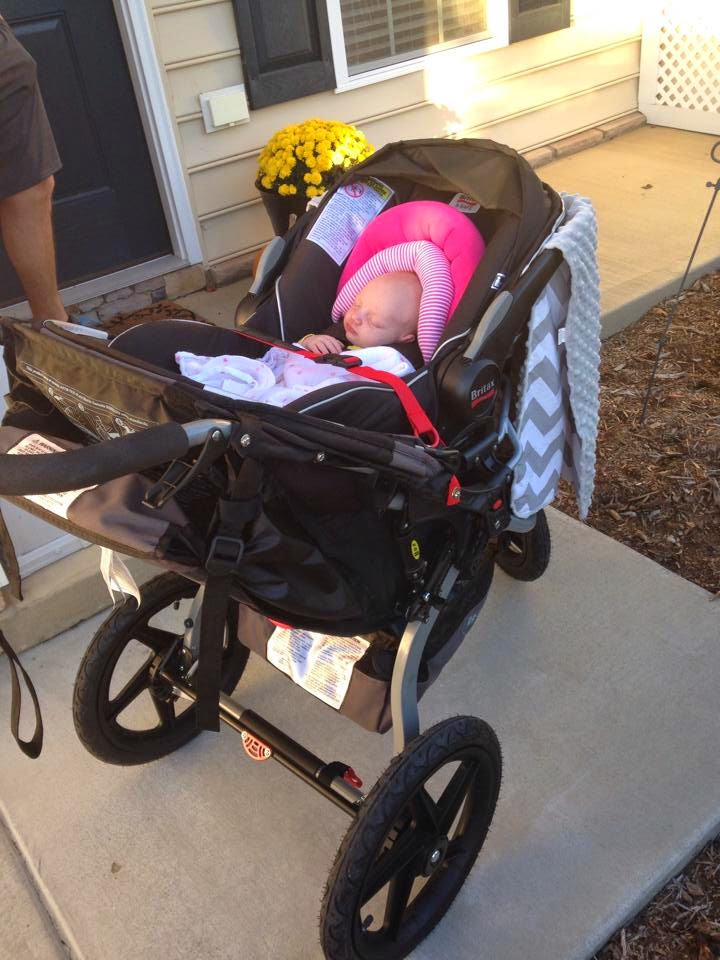 Another thing I thought would be difficult was traveling with an infant. We had planned a weekend trip to the mountains in October before she was born, and I was admittedly a little nervous as the date got closer and closer. I’d heard disastrous stories about traveling with a baby, and we’d never taken her in the car for longer than hour at a time. However, I have to say that it was surprisingly painless and I’d do it again in a heartbeat! She did so great – we stopped once on the way there and back (3.5 hour drive each way) to feed and change her, but otherwise, she slept pretty much the entire time. It definitely added time to our trip (feeding and changing a baby can take way longer than you’d expect…), but it was really stress-free and even, dare I say, easy.
I also tested her limits last week when we took her to Homearama to walk through the new homes, which happened to be in our neighborhood this year. I even put her in the Moby Wrap, which I was nervous about, since she hasn’t really liked babywearing thus far. She ended up doing great, and slept almost the entire time (minus a few times I thought she was going to have a meltdown…but luckily didn’t!). 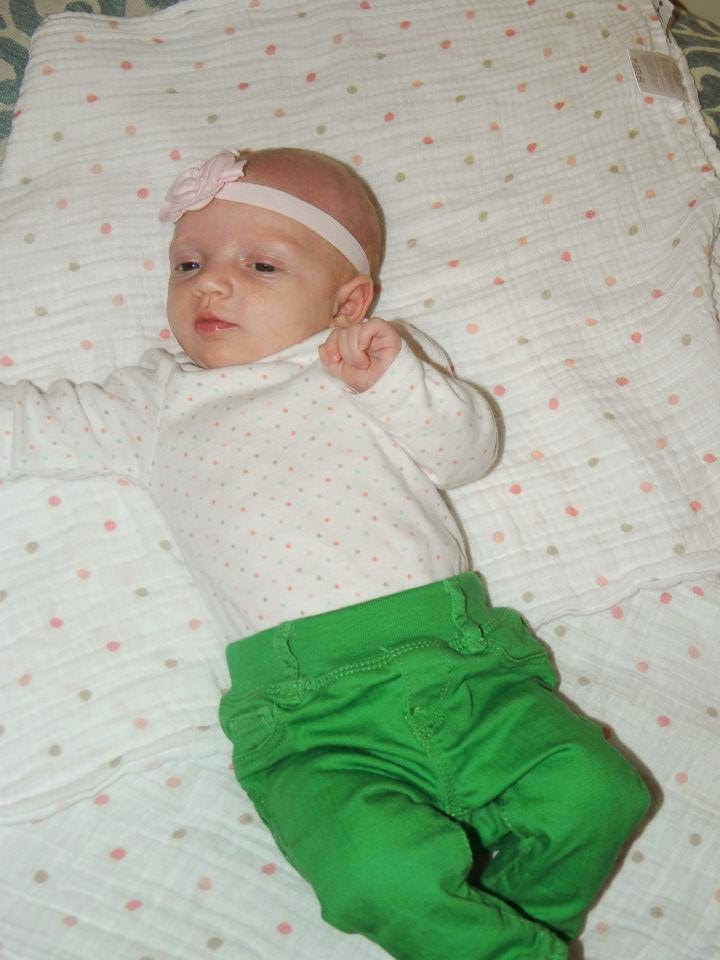 We’re really happy she’s been so laid back with traveling, since it seems like we’re always on the go! After spending the first few weeks worried about how we’d ever get back to our ‘normal’ routine, I’ve learned that it’s really not so difficult to adjust to the new normal because she tends to go with the flow, especially when it comes to running errands or traveling. As long as she’s moving, she’s happy….we’ve learned to never stop the stroller when we’re out with her! 😉